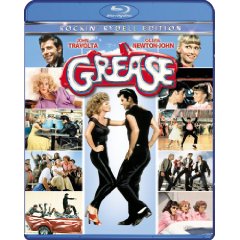 Riding the ’50s nostalgia wave that swept through America during the late 1970s (caused by TV shows like Happy Days and films like American Graffiti), Grease became not only the word in 1978, but also a box-office smash and a cultural phenomenon. Twenty years later, this entertaining film adaptation of the Broadway musical received another successful theatrical release, which included visual remastering and a shiny new Dolby soundtrack.

The young, animated cast also deserves a lot of credit, bringing chemistry and energy to otherwise bland material. John Travolta, straight from his success in Saturday Night Fever, knows his sexual star power and struts, swaggers, sings, and dances appropriately, while Olivia Newton-John’s portrayal of virgin innocence is the only decent acting she’s ever done. And then there’s Stockard Channing, spouting sexual double-entendres as Rizzo, the bitchy, raunchy leader of the Pink Ladies, who steals the film from both of its stars. Ignore the sequel at all costs.

John Travolta (Saturday Night Fever, Face Off, Pulp Fiction) and Olivia Newton John (Two Of A Kind, Xanadu) as Danny and Sandy trying to make their senior year in high school the best it could be after spending a summer together falling in love. The trials and tribulations of high school, graduating, rivals gangs and sexual advances all in the 1950’s – a time of music and passion and a lot of simple things.
Movie Content: 9/10

The print is presented in 1080p/AVC MPEG-4 with a 2.35:1 aspect ratio. Paramount has been doing a great job with their catalog releases and this is something that I will continue to promote. Considering that this film is 30 years old, the print offers an above average rating against other catalog titles. By no means is this bad. Colors are strong and bright throughout the print offering a decent pop to the image. Black levels are deep. Details were good in several scenes on up close shots, but when the camera panned away there was a loss of detail. There is grain in the film which is not consistent throughout the print. This can get a bit distracting at times. The inconsistency of the quality in the image was like this throughout the entire film where some scenes look great and others did not.
Print Quality: 7/10

The audio is presented in Dolby TrueHD 5.1 mix. Albeit ‘Grease’ being a film based on music due to it being a part of the music genre this is a front heavy experience. The surrounds get a few effects creeping through, but not enough to my liking for a film like this when compared to ‘Saturday Night Fever’. It is a mix that could have benefited greatly by making the soundfield a very expansive and atmospheric experience. The dialogue was clear and crisp with no apparent issues. The mix is well balanced with the low usage of the surrounds.
Audio Quality: 7.5/10

‘Grease’ is a timeless classic that has its fans worldwide. I am not a huge fan of musicals but even the film ‘Grease’ holds my attention with every single viewing over the years. The film on Blu-ray is a mixed bag from a video and audio standpoint, but will be enough to make fans of the film happy.
Overall Rating: 7/10