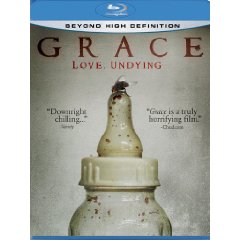 Eight months pregnant, Madeline Matheson deflects her demanding mother-in-law’s insistent pressure for standard hospital treatment, instead opting for the peaceful companionship of a trusted midwife. Though reluctantly compliant, her husband remains supportive of her choices until a sudden tragic accident leaves her unborn baby lifeless inside of her. Madeline remains determined to carry the stillborn baby to term, where she miraculously wills the delivered corpse into life. But it is not too long before the increasingly isolated mother realizes that something is not right with baby Grace, and she must make horrible sacrifices to keep her living.

The movie became sort infamous among genre fans after it screened at Sundance earlier this year, garnering a reaction from some audience members that recalls stories of the first showings of ‘The Exorcist’ (people fainting, throwing up, etc). I firmly believe that these things only happened because movie-goers at that particular festival are not accustomed to graphic, dark subject matter like that which is included here. However, that is not to say that the film does not contain some very cringe-worthy moments.

In some ways, the real story in ‘Grace’ is one of obsession. It seems that every single character in this film is obsessed in some way or another, whether it’s Madeline’s obsession with having a baby, even a dead one; or, her husband’s bizarre Oedipal obsession with his mother; or her mother-in-law’s very strange obsession with still wanting to create breast milk; or her old friend’s obsession with Madeline. Unfortunately, this is also not a movie about obsession because none of these underlying neuroses are even remotely explored, other than in a very cursory way, for shock value.

‘Grace’ seemingly glazes over plot details, willing its viewer to just go along with the story for the sake of the story. No meaningful characters are created. It’s simply broad strokes: crazy, hippy mommy, WASPish but also insane mother-in-law, “evil doctors” who want to take her baby away and other assorted crazies.
Movie Quality: 6/10

The print is presented in 1080p/AVC MPEG-4 with a 2.35:1 aspect ratio. Colors look saturated holding a consistent pop throughout the film. This is a darker looking film which holds rather well in high definition. Blacks are deep providing some very good details. The print is pristine from any blemishes providing a rather clean image. While this is not demo material, I found the transfer to be very good considering that this is low budget film.
Video Quality: 8.5/10

The audio is presented in Linear PCM 5.1 mix. ‘Grace’ is a dialogue driven film, with excellent use of the surrounds when needed. The dialogue was clear and crisp with no apparent issues. The mix is well balanced. The rears do get some use with the soundtrack, and offer the excellent depth for the material presented. I would say that this mix was sufficient enough for this type of film.
Audio Quality: 7/10

It’s obvious that writer/director Paul Solet was trying to make an indie art horror film, with the slow-motion sequences, off-kilter shots (to signify the growing insanity), interspersed clips of animals being mutilated, killed or feeding their young. ‘Grace’ is well worth a rental for horror fans as you get the opportunity to see a new concept in a genre of remakes the last few years.
Overall Rating: 8/10