A true motion picture phenomenon, this triumphant story was nominated for 9 Academy Awards(R) — winning Oscars for Robin Williams (Best Supporting Actor) and hot newcomers Matt Damon and Ben Affleck (Best Original Screenplay). The most brilliant mind at America’s top university isn’t a student … he’s the kid who cleans the floors! Will Hunting (Damon) is a headstrong, working-class genius who’s failing the lessons of life. After one too many run-ins with the law, Will’s last chance is a psychology professor (Williams), who might be the only man who can reach him! With acclaimed performances from Academy Award(R)-nominee Minnie Driver (GROSSE POINTE BLANK) and Ben Affleck (ARMAGEDDON) — you’ll find GOOD WILL HUNTING a powerful and unforgettable movie experience! 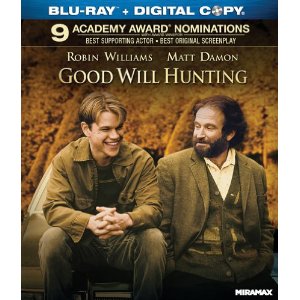 With Good Will Hunting, Matt Damon and Ben Affleck (Oscar, best writing, best screenplay) assert that their knowledge and maturity as filmmakers may even supersede their acting skills. The co-written 1997 character study hits the viewer’s heart and mind more fervently than the fists of its pugnacious main character.

Damon stars as Will Hunting, a cocky and confrontational twenty year old from south Boston who works construction by day and is a janitor at MIT by night. Hunting, who was abused as a child, spends the majority of his time carousing at bars, picking fights, and charming women with his wit and charisma. Affleck balances Damon’s role fittingly as his simple minded best friend Chuckie, who also works construction and sees his fair share of courtrooms.

The best friends, however, share one distinct difference; Hunting is a self-taught genius, a mathematical savant capable of using his photographic memory to solve the academic world’s most complex problems. Damon’s gift is discovered as he is casually solving an equation that renowned MIT math professor Gerald Lambeau (Stellan Skarsgard) has posted to challenge his best students.

After being arrested again on assault charges, Lambeau arranges the release of Hunting on the condition that he will agree to work with him on a weekly basis doing math problems and that he will see a therapist. Hunting is unwillingly thrust into a journey to apply his potential and ability to a world that has perpetually rejected him throughout his adolescence. After making fools of the first five therapists he is assigned, Hunting meets his match in Lambeau’s old college roommate, Sean McGuire (Robin Williams), a similarly distraught man who gains as much from Will as Will from him.

Good Will Hunting could easily have been your typical “intellectual prodigy, overcome odds to rise to the top” inspirational story – and it almost is. But the character development provided by the careful writing and exceptional directing by Gus Van Sant, along with an extraordinary cast and occasionally brilliant monologues by Damon and Williams – give the south Boston flick an edge and individuality that helped it earn nine Oscar nominations and two wins.
Movie Quality: 9.5/10

The print is presented in 1080p/AVC MPEG-4 with a 1:85:1 aspect ratio. This print looks pretty good when compared to the previous DVD release. No DNR or EE has been used here and it really shows with the print carrying a thin layer of grain. The grain is a nice thin layer that never becomes obtrusive. Black levels are good, but not excellent and even look a little crushed at times. Colors are pretty good, but lack that strong pop for a film of this age due to the cameras used.
Print Quality: 9/10

The audio is presented in a DTS-HD MA l0ssless 5.1 mix. This is a front heavy experience which mainly uses the front channels. Every so often there is ambient sounds pouring into the soundfield from various effects and the score. Danny Elfman’s score shines here the most. Dialogue is clean through the center sounding ever so crisp.
Print Quality: 9/10

Good Will Hunting is a tribute to the dreams of American youth. Both because two young men managed to reach the pinnacle of their craft on their first outing but more importantly, because it deals with one young man’s struggle to overcome his troublesome past while reaching out to grasp life, love and happiness.
Overall Rating: 9/10