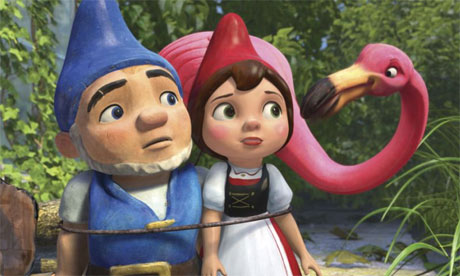 It’s the age-old story of forbidden love between feuding families, but Shakespeare’s classic tragedy Romeo and Juliet becomes quite a comedy when the young lovers in question are different-colored gnomes from backyards on opposite sides of a tall wooden fence. Lured out of their respective gardens by wanderlust and an exotic orchid, Gnomeo (James McAvoy) and Juliet (Emily Blunt) meet and instantly fall in love. Their forbidden love blossoms with a little help from a plastic pink flamingo named Featherstone (Jim Cummings), and soon life-threatening lawnmower races ensue, an epic battle is staged, and wisteria trees and gnome hats are hacked to bits in the process. Shakespeare himself (Patrick Stewart) makes an appearance and declares that, while this story bears a marked resemblance to one of his own, he’s not sure it will end in quite the same way. Shakespunian nuggets of wisdom include “A weed is by any other name, still a weed,” and that fairness demands “a hat for a hat,” and of course the philosophical question “What’s in a gnome?” just has to be asked. Executive producer Elton John’s penchant for over-the-top showmanship finds a perfect home in the gnomes’ elaborate backyard sets, and his musical score is an effective blend of classic and original songs, including a new collaboration with Lady Gaga called “Hello, Hello.” Other legendary musicians lending their talents to the voice cast include Dolly Parton and Ozzy Osbourne. This film is funny, engaging, and, with the possible exception of one particularly scantily clad gnome, appropriate for the whole family. 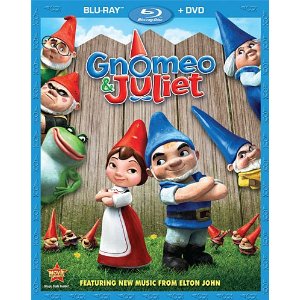 The movie takes place in the modern day gardens of the Capulet and Montague families. In their gardens they have tons of of cute little lawn gnomes running around, who hate each other, and are separated by their colors, red and blue. Our main characters are Gnomeo(James McAvoy) a blue gnome, and Juliet(Emily Blunt) a red gnome. After the blues and reds have a lawnmower race with Gnomeo and Tybalt(Jason Statham) as the racers. Tybalt ends up cheating and causes Gnomeos lawnmower to get destroyed. Gnomeo plots revenge and decides to sneak into the reds garden at nightfall. at the same time Juliet is plotting to go on top of a greenhouse out in the distance that holds a beautiful flower at the very top.

Gnomeos plan goes awry and he takes off towards the greenhouse to try to escape the reds he sees somone running towards the flower and he chases after the and grabs the flower right as Juliet reaches for it. The two fight over the flower and end up falling for each other in the process, when they discover that they are actually supposed to be enemies they are shocked. The two lovebirds decide to meet at a secret garden at certain times to profess their love to one another. While at this garden they meet an eccentric pink flamingo named featherstone, who had his lovebird taken away from him and was locked in a shed for 20 years. The flamingo teaches them they can’t let anyone stand in the way of their love and they have to fight for their right to be together. But it’s up to Gnomeo and Juliet to pull it off..
Movie Quality: 7/10

The print is presented in 1080p/AVC MPEG-4 with a 1:85:1 aspect ratio. This has to be one of the best 2D animations that I have ever seen in terms of picture quality.  ‘Gnomeo & Juliet’ is a rather colorful film that also has a bright presentation. Disney knows how to do animation and this is where they succeed in rather well. With such a great color palette also brings excellent details that are rather impressive. Diseny outdoes itself here again as there were many scenes of the film in the opening act that actually looked lifelike. There are a lot of scenes at the beginning of the film that have a full 3D pop. I felt like I was watching a live action film at times.
Print Quality: 10/10

The audio is presented in a DTS-HD MA lossless 5.1 mix. The soundtrack is great and that is what holds up quite well through the entire film in terms of sound and then the sound effects. Sound is well balanced across the soundfield with much more front heavy experience. Dialogue  comes through the center clear and crisp.
Print Quality: 9.5/10

The casting is a sort of coup really given the famous names featured here – there’s Jim Cummings, Patrick Stewart, Dolly Parton, Ozzy Osbourne, and many more! The movie is a kaleidoscope of color and at times this can get a tad overwhelming but the children appeared to love it, so my verdict – awesome entertainment for the kiddie set!
Overall Rating: 8/10