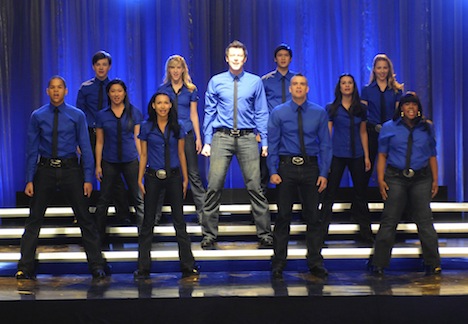 Put on your dancing shoes and get ready to Gleek Out! This full-length DVD features a set list of Season One’s most sensational musical numbers – back to back so the party never has to end! All your favorites are here, including Queen’s “Somebody To Love, Journey’s “Don’t Stop Believing” and Madonna’s “Express Yourself!”

I’ve said since the third episode of Glee’s first season that the show’s weakest quality was the filler in between the songs. The writing is embarrassingly inconsistent in tone, the characters are prone to erratic shifts in emotion and motivation, and from one week to the next the show’s threads never really connected. The music though, the music was pretty damn good. The song choices, the mash-ups, and the new arrangements on old classics were and remain little nuggets of gold that the Glee fan has to dig out of each episode. Well stop sifting. Glee Encore singles out the big musical numbers and lets you play them back to back, shuffled, or on an individual basis. It’s like the “Glee Jukebox” feature on later Glee season releases but it has them all on one disc, not separated across 3 or 4. From here on out, every season DVD release for Glee needs to either include this (all on one disc) or have its own version of this disc released on the same day.

Originally I was somewhat iffy on the release as its wording of “most sensational music numbers” leaves a lot of room for personal interpretation of which songs should be on the disc and which shouldn’t. But here’s a translation of that little fragment “90% of the musical numbers that feature at least 60% of the song being rearranged or that have a large amount of choreography associated with it.” As the second season has become increasingly song-based with less reliance on all the soap opera hand-wringing in between, perhaps someday Glee will only be musical numbers that contain loose plotpoints told within. Listen up, Ryan Murphy and co.

That said, this is genuinely the way to watch Glee. Cut out the fat, and enjoy Glee Encore’s 77-minute compilation of pretty much all the musical moments of Glee’s first season.

The print is presented in 1080p/AVC MPEG-4 with a 1:78:1 aspect ratio. The print looks very good throughout without any apparent issues. Colors are vibrant and carry pop which brings out the fine details. The detailed scenes stand out very well. Blacks are deep. I found the print to be crystal clear with no artifacts or print damage.
Print Quality: 9/10

The audio is presented in a DTS-HD MA lossless 5.1 mix. Audio is immersive with the DTS-HD mix was added with the surrounds getting usage during the musical scores. I was rather impressed with the sound design compared to what was available on broadcast television. Dialogue is well placed and clean throughout the center channel yet there was an issue with the audio mix being too low at times.
Print Quality: 9/10

I do enjoy watching the musical performances, but thought this was a Encore CD showcasing the best of music from the first 2 seasons, which would have been awesome. Maybe in the future. I do think the songs this DVD has a lot of the best!
Overall Rating: 7/10