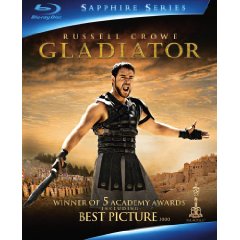 A big-budget summer epic with money to burn and a scale worthy of its golden Hollywood predecessors, Ridley Scott’s Gladiator is a rousing, grisly, action-packed epic that takes moviemaking back to the Roman Empire via computer-generated visual effects. While not as fluid as the computer work done for, say, Titanic, it’s an impressive achievement that will leave you marveling at the glory that was Rome, when you’re not marveling at the glory that is Russell Crowe. Starring as the heroic general Maximus, Crowe firmly cements his star status both in terms of screen presence and acting chops, carrying the film on his decidedly non-computer-generated shoulders as he goes from brave general to wounded fugitive to stoic slave to gladiator hero. Gladiator’s plot is a whirlwind of faux-Shakespearean machinations of death, betrayal, power plays, and secret identities (with lots of faux-Shakespearean dialogue ladled on to keep the proceedings appropriately “classical”), but it’s all briskly shot, edited, and paced with a contemporary sensibility. Even the action scenes, somewhat muted but graphic in terms of implied violence and liberal bloodletting, are shot with a veracity that brings to mind–believe it or not–Saving Private Ryan, even if everyone is wearing a toga. As Crowe’s nemesis, the evil emperor Commodus, Joaquin Phoenix chews scenery with authority, whether he’s damning Maximus’s popularity with the Roman mobs or lusting after his sister Lucilla (beautiful but distant Connie Nielsen); Oliver Reed, in his last role, hits the perfect notes of camp and gravitas as the slave owner who rescues Maximus from death and turns him into a coliseum star. Director Scott’s visual flair is abundantly in evidence, with breathtaking shots and beautiful (albeit digital) landscapes, but it’s Crowe’s star power that will keep you in thrall–he’s a true gladiator, worthy of his legendary status. Hail the conquering hero!

I’ve always been drawn to epics of this nature. ”Gladiator’ tells the story of Maximus Decimus Meridius, one time general to the Roman army, as he battles in the gladiatorial arenas just waiting for his chance at revenge. Maximus’ life was going well for a time. He was leading the army to victory (as is seen in the opening battle sequence), earning the respect of Emperor Marcus Aurelius and in effect earning the right to return home to his wife and son. Before he can return home though he is given a privileged assignment by the Emperor, an assignment that ultimately causes Aurelius’ son Commodus to kill his father and order Maximus’ execution. Not just that but he goes as far as to order the murder of Maximus’ wife and son leaving him with nothing. Maximus of course escapes his own death only to uncover the extent that Commodus has gone. With a broken spirit and a wounded soul Maximus collapses in the desert only to wake up a slave being trained for the coliseum. When Maximus hears that Commodus is holding a gladiatorial event in the honor of his late father he sees this as his golden opportunity for revenge.

What Ridley Scott has done here is create for us a beautiful and intoxicating story of love, betrayal, devotion and revenge. As ‘Gladiator’ unfolds we watch the story of a man and his plight, his determination fueling our interest. We become invested in this man and his relationships. We develop our own loathing for Commodus as well as our deepest sympathies for his beautiful sister Lucilla. Lucilla becomes an emotional catalyst for the film in areas being almost the only mediator between Maximus and Commodus, as well as the members of the Senate against Commodus’ rule. Lucilla once loved Maximus herself but now she needs his help more than ever to help carry out her fathers wishes of handing power over to the Senate. Lucilla has a lot at stake though. Not only is she risking her own life by deceiving the Emperor but she risks the life of her young son Lucius who’s taken a liking to the gladiator known as Maximus. Lucilla also has to detour her brothers sickening advances towards her in hopes of spawning a perfect heir.

Russell Crowe delivers one of the most powerfully moving performances of his career  and definitely turns out the most impressive performance of the given year. As Maximus he delves deep into his character and gives the audience a reason to watch. Joaquin Phoenix also delivers a spot on portrayal of the evil Commodus. He perfectly captures the immaturity within Commodus’ every move and that lies behind every motivation. Connie Nielsen is wonderfully reserved as Lucilla. With her restrained performance we can see the underlying emotion within her each and every step. The supporting players also deliver on all fronts. Oliver Reed is hilariously entertaining as Proximo and Richard Harris is effective as the dying Marcus Aurelius, but it’s Djimon Hounsou who really shines here. With his moving portrayal of Juba, a fellow gladiator, he brings to us a glimmer of hope amidst the doomed affair. It’s no wonder this man is a two time Oscar nominee already.

As wonderfully effective as the cast truly is there is no star like the amazing cinematography. With each and every passing of the camera lens the screen illuminates with detail unlike any other. The Italian country side is gorgeously captured, the Roman Coliseum (as digitally remastered as it is) is fantastically accurate and the set designs are breathtaking to say the least. What I found amazing was that each and every actor looked dignified and authentic, which is hard to do when you’re running around in togas and fighting in sandals. Nothing looks cheesy but everything looks as it should and carries the feeling of weighty authority that it deserves.
Movie Quality: 10/10

The print is presented in 1080p/AVC MPEG-4 with a 2.35:1 aspect ratio. The message boards of various online web sites such as AVS and Highdefdigest are under fire with the picture quality of this film. To a degree I can understand where many of the complaints are coming from since this transfer is uneven with DNR and EE throughout. In some scenes the DNR sticks out like a sore thumb and in others it is not as bad as I have seen in other films. Then add the dreaded edge enhancement which affects certain textures and as seen in many of the faces that we do not get accurate fleshtones. It looks like all these actors went for a sun tan before they started filming. In this age of high definition in the homestead, both EE and DNR are looked as a huge no-no. Throughout the film you can tell that they tried to clean up too much with the noise which hampers the image to a degree. Daytime scenes look good with natural lighting and are some of the best scene in the film. There are a few white specs that appear every so often, but you have to really look close for them.

Details are another issue that I had with the film. Up close scenes look great for the most part, but there are also scenes that contain less details even with the camera panned on a single scene. I can not deny that for the most part details are on the stronger side albeit a few issues. I found black levels to be very strong as there are a lot of darker scenes in this film. Colors are strong throughout the entire film standing out with reds, blues, oranges, and browns being the most used of the color palette. Then on the flipside there are also scenes that look muddy when the camera is panned away, which at times can look like a blended mess. This all comes to my next point, and a lot of these inconsistencies stand out most when you have the digitally enhanced 2005 Extended Cut scenes mixed in with the Theatrical Cut. When you have scenes that look like reference quality vs. scenes that weren’t remastered off the same source it becomes apparent to videophiles.

At one point in time during the HD DVD vs. Blu-ray war, I thought that if this title would have been released it would have swayed many to the opposing format. I am glad that finally ‘Gladiator’ is in high definition on Blu-ray and my DVD can finally be retired. The problem is that this all comes at a price and I hope that one day Paramount will go back and give this film the proper treatment that it deserves. If you own the DVD and have expendable cash, I would recommend upgrading as this is the best the film has looked yet. There are enough issues to detour even the hardcore fans of the film.
Video Quality: 6/10

The audio is presented in DTS-HD MA lossless 5.1 mix. The audio is excellent receiving demo worthy praise albeit issues on the video side. Even on DVD this film was very strong technically in the audio department providing one of the most immersive experiences from an Epic adventure. The score is phenomenal and is one of the main draws of this film that makes you feel as a part of the story. Bass is just perfect with the score as it gives you that very unpredictable feeling. The soundfield is engaging at all times pulling you in making this a very atmospheric experience.

The rears encompass nice directional movement from speaker to speaker. From the cheering and hollering in the coliseum to swords and shields clanking against each other, you hear the crispness of the audio. I was amazed at how I felt like I was sitting in the middle of the fighting. ‘Gladiator’ is a nice mix of dialogue and action, with dialogue being more prominent. I found the dialogue very clean and crisp through the center channel with no issues. This is a well balanced mix without having to adjust the volume to hear the dialogue. If you want to show off your audio equipment and how amazing Blu-ray can sound, this is a disc you will to pull out.
Audio Quality: 10/10

I come to my final thoughts with some mixed feelings about ‘Gladiator’ on Blu-ray. The film’s story is fantastic and that alone should be the reason to go out and either rent or purchase this. The problem with this nearly 10 year old film is that the video did not receive the proper treatment that it deserves especially since this falls under Paramount’s Sapphire line of  Blu-ray products which one would assume excellence. The audio is demo worthy and will get a nice work out from your home theater components. If you are a fan of the film and own the DVD, this is a decent upgrade as I do not expect Paramount to create a new master any time soon for this film. If you must own the film, this week Best Buy is offering ‘Gladiator’ and ‘Braveheart’ for $36 after a $10 off promotion for purchasing both titles. There is also a $10 by mail promotion for previous DVD owners on the package to help lower the cost. This alone in my eyes makes the upgrade even much more worth it albeit some of the video issues with the film.
Overall Rating: 9/10