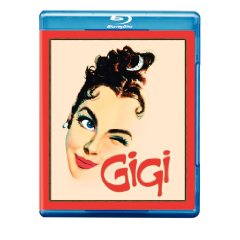 ‘Gigi’ is a Parisian schoolgirl who lives with her grandmother and regularly goes to her great-aunt Alicia’s for lessons in manners and refined knowledge. However, the innocent Gigi is unaware that her family is grooming her to become a high-class courtesan, and that both her great-aunt and grandmother are/were courtesans themselves.

Elsewhere is Gigi’s friend, Gaston, a young man who is bored by his life and the sameness of everything. He consorts with a beautiful courtesan who cheats on him, leaving him wildly zipping from one girl to another. You get the feeling that Gaston wants to live a “normal” life, but this high-class lifestyle is all he’s grown up with. Naturally, he and Gigi begin to be drawn to each other.

The scenery of Paris and the buildings are gorgeous; the music is wonderful. Gigi bemoans the French preoccupation with love and romance with the funny “I Don’t Understand The Parisians!”; Gaston’s frustrated thoughts on his mistress’s attitude “She Is Not Thinking Of Me”; the wistful duet between Honore and Madame Alvarez “I Remember It Well,” and many others.
Movie Content: 7/10

The print is presented in 1080p/VC-1 with a 2405:1 aspect ratio. This is one of those prints that will have fans of the film happy and those that are kind of wondering why some of the glaring issues weren’t properly cleaned up. There are artifacts and white specs that pop up throughout the print. Colors have a soft look to them with colors like red sticking out the most. Black levels carry excellent depth. Details are excellent.
Print Quality: 8/10

The audio is presented in Dolby TrueHD 5.1 mix. This is not a mix that will blow you away, but the rears do provide several moments of excellent sounding effects from the score. The score is very good and fits the film well. The dialogue is clean and clear through the center channel. This is a well balanced mix.
Audio Quality: 8.5/10

‘Gigi’ was an alright film that fans will still enjoy all these years later. I wasn’t quite amazed by the film as it does not hold up well in 2009. On Blu-ray the image has a few issues, but overall is a decent print.
Overall Rating: 7/10