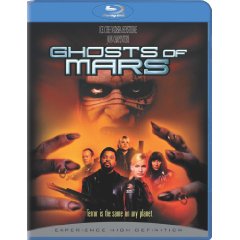 Melanie Ballard (Natasha Henstridge), alongside Helena Braddock (Pam Grier) and Jericho Butler (Jason Statham), is a police lieutenant in the Mars Police Force nearly 150 years in the future. Bodies go missing at a mining town in the Mars desert; the missing people are blamed on the notorious criminal James “Desolation” Williams (Ice Cube). When the team reaches the remote outpost, they find that “Desolation” had little to do with the disappearances but something else more horrifying is involved.

When I first saw this movie in theatre, I left the theatre kind of perplexed, I had thought it was a decent action movie but thought it was missing something. Then it released DVD and my opinion changed about the film more than my initial viewing. ‘Ghosts of Mars’ is one of John Carpenters most underrated movies ever created. The movie is not perfect by any means, yet it does receive a lot of negative buzz. While the film is not totally original, Carpenter makes the film feel that much more than one would expect with the sense of atmosphere.

While the special effects aren’t the greatest in film history, they are passable. It’s the soundtrack that wins you over in the end. I do not care one bit for the band Anthrax, yet they performed all of the music that was written by John Carpenter. The music alone gives the film some excellent atmosphere and further helping push the apocalyptic feel.
Movie Rating: 7.5/10 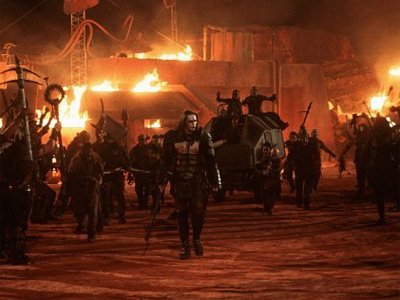 The print is presented in 1080p/AVC MPEG-4 with a 1.85:1 aspect ratio. The print looks good on Blu-ray having seen this film plenty of times on DVD and television over the years. Colors look saturated holding a consistent pop throughout the film. Reds and Oranges are strong throughout as they are the most dominant colors. Blacks are deep providing some very good details. The print is pristine from any blemishes providing a rather clean image. While this is not demo material, I found the transfer to be very good blowing away the previous DVD release.
Print Quality: 8/10

The audio is presented in Dolby TrueHD 5.1 mix. Sony engineers have done another great job here with the audio presentation. The audio takes advantage of the soundfield with the rears getting a good amount of usage. Special effects such as guns blazing sound very good. The soundtrack is exceptional with the score/soundtrack written by John Carpenter and performed by Anthrax. The soundtrack gives this film atmosphere and character. Dialogue is clean and clear through the center channel. This is a well balanced mix with no issues of having to raise or lower the volume.
Audio Quality: 8.5/10

All special features are available in standard definition. The extras aren’t anything earth shattering here for this film, but the audio commentary with John Carpenter and Natasha Henstridge is an interesting one. Anytime I get to listen to a Carpenter commentary on one of his films, its a real treat. I also enjoyed the “Featurette: The Music Behind The Movie” which goes into details about the soundtrack used for the film.

‘Ghosts of Mars’ is definitely worth seeing for any fan of sci-fi or John Carpenter films. While the film is not original, there are some interesting aspects that keep you entertained. The Blu-ray version of the films offers some excellent looking visuals and fantastic sound for a catalog title.
Overall Rating: 8/10