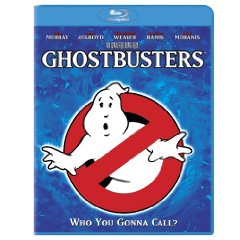 Dan Aykroyd and Harold Ramis wrote the script, but Bill Murray gets all the best lines and moments in this 1984 comedy directed by Ivan Reitman (Meatballs). The three comics, plus Ernie Hudson, play the New York City-based team that provides supernatural pest control, and Sigourney Weaver is the love interest possessed by an ancient demon. Reitman and company are full of original ideas about hobgoblins–who knew they could “slime” people with green plasma goo?–but hovering above the plot is Murray’s patented ironic view of all the action. Still a lot of fun, and an obvious model for sci-fi comedies such as Men in Black.

Drs. Peter Venkman (Bill Murray), Raymond Stantz (Dan Aykroyd), and Egon Spengler (Harold Ramis) work for the parapsychology department at Columbia University in New York. While Dr. Venkman doesn’t really believe in the paranormal (he’s really only in it for the chicks), the other two do. And just when the three do find proof that ghosts exist, the University revokes their funding and kicks the three off the campus.

There are many reasons why this movie has become a cult favorite with its fans. Some of the funniest lines in the movie were not written, but actually ad-libbed during filming. This is a testament to the comedic genius of Murray, Aykroyd, and Ramis. The Oscar Nominated song ‘Ghostbusters’ by Ray Parker, Jr., is still one of the best movie songs of all time. In addition, there is the always eating, green ghost who slimed his past Dr. Venkman and into our televisions sets as Slimer in the 1988 animated cartoon series of the same name. And who can forget the giant Stay Puff Marshmallow Man. Not before or since has there been a movie monster as great as this guy. My only real complaint here in 2009 is that while some of the special effects hold up, the scenes with the dogs just look painfully bad.
Movie Content: 9.5/10

The print is presented in 1080p/AVC MPEG-4 with a 2.40:1 aspect ratio. Having owned multiple versions of ‘Ghostbusters’ over the years, I will say that this is the best that the film has looked on home video. Sony engineers have done a good job going back and making this print a real treat for the fans……but I do believe that with some more work this is something that could have been special. I found that the color pallette actually looks the best it has with an upgrade in the saturation department. It really shows when looking at the boys outfits as an example where the reds in the ‘Ghostbusters’ symbol really pops out. There are some scenes that run soft but in no way do they hinder the picture. There is also a level of grain throughout the entire presentation. I think that this is going to cause an uproar for those that hate grain. It was never a hinderance to me as it always appeared worse to me on the DVD releases. Black levels were rather deep in some scenes, but in others blacks do look a bit faded. My biggest complaint with the print is in several scenes where the picture is too bright and it just overpowers everything around. While this is the best ‘Ghostbusters’ has ever looked, I do believe that with a bit more work that the picture quality could be even better.
Video Quality: 8/10

The audio is presented in DTS-HD MA lossless 5.1 mix. While the video presentation is lacking in a few areas, the audio presentation did receive that much needed upgrade to high definition audio. The entire soundfield keeps you immersed at all times when the boys are on a mission to trap a ghost with all kinds of special effects noises. This is more of a front heavy experience, Sony engineers did an excellent job in pushing those sounds dynamically from those front channels. The rears also do get some sound through them, but is very minimal from sound effects and the score. Dialogue is clean and presented through the center channel. My slight complaint is that I needed to increase the volume a bit higher than normal for the audio portions. I was very surprised as to how well this film sounded for something that is from the early 80’s.
Audio Quality: 9/10

All special features are presented in standard and high definition with all the extras ported over from the 2005 special edition.

‘Ghostbusters’ turns 25 this year and the film still holds up rather well today albeit a few of the special effects looking not so good. The dialogue and comedy are still great pulling some laughs from the viewer even after multiple viewings. On Blu-ray the the transfer looks good, but there are a few issues that could have been alleviated before release. On the audio front the film sounds excellent with a new mix for this release. If you are a fan of the film, I would definitely recommend upgrading to the Blu-ray version of the film even though there are a few issues. With the porting of all special features from previous DVD releases and a few of them in high definition, this is well worth the upgrade.
Overall Rating: 8.5/10