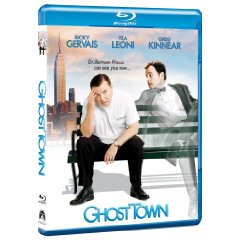 ‘Ghost Town’ is a comedy that was in and out of the theater quicker than the blink of an eye. It is a bit of a shame as this is a quirky and smart comedy that has you laughing throughout. The film grossed a worldwide box office total of $24 million dollars.

Bertaram Pincus (Ricky Gervais) has the strangest personality for being a dentist. He serves the public, but he does not like them the least bit. I would personally fear to go to a doctor like this thinking that they may harm me on purpose. His personality shows during his practice as he immediately stops his patients from talking to him. He is essentially also a very stuck up person. Pincus is almost like a hermit that does not like to socialize. Pincus lives like this day to day which also makes him an unhappy and miserable person inside.

Pincus ends up getting sick himself which ends up the need for surgery. Pincus goes through his surgery and after a few days is out of the hospital. He has a side effect that really ends up sending him bonkers. Pincus is able to see ghosts. Even worse is that even though he can see ghosts, there are a few that actually follow him around. The one that sticks out the most is Frank Herlihy (Greg Kinnear) who was a rich man that just passed away. Frank has a mission to stop his wife Gwen (Tea Leoni) from getting married to a man that is just after her money. Even though Frank did do a few things that were wrong in his marriage, he still wants the best for his widow.

The game turns into Bertram trying to break up Gwen and her boyfriend Richard (Bill Campbell). Bertram is very resistant at first on doing this since he is a loner. The thing is that Bertram is being coached along by Frank the entire time. Things go in a different direction than Bertram and Frank expected. Gwen starts to slowly fall for Bertram the more they see each other. Bertram starts to finally open up as a person which he never did before. This is due in part to Gwen.

As I mentioned above about the low box office receipts for the film, this is a comedy that many will look at twice as they pass the cover box at a store but may not rent or buy. While this isn’t a film that you will watch several times over the course of the year, the story is pretty good and the cast does an excellent job. Ricky Gervais, Greg Kinnear, and Tea Leoni click very well together. Gervais and Kinnear really had good chemistry with the comedic act
Movie Content: 4/5 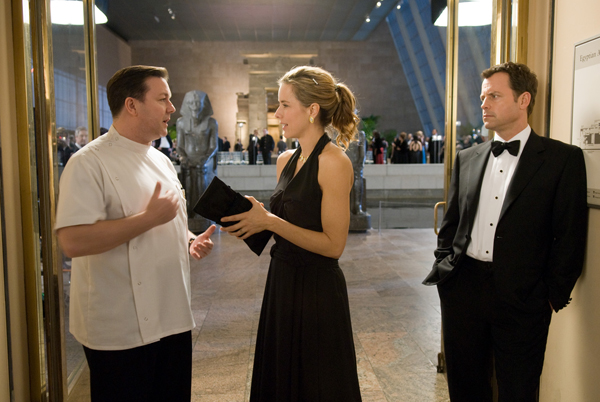 The print is presented in 1080p/AVC MPEG-4 with a 1.85:1 aspect ratio. The print is one of the better ones that I have seen for a comedy film. Colors are vivid and bright providing a nicely saturated presentation. Blacks are solid throughout the print. Flesh tones are natural looking with no enhancement. Details look very good in this film providing excellent depth.
Video Quality: 4.5/5

The audio is presented in Dolby TrueHD 5.1 mix. ‘Ghost Town’ is a more dialogue driven film with excellent audio for the premise of the film. With this being a romantic comedy, there are no action sequences, so don’t come in expecting a bombastic mix. Dialogue is very clean and crisp through the center channel. We have more of a front heavy experience with the mix as dialogue also tends to pan between the front speakers. When the rears get are in use, you hear a few sound effects and the score.
Audio Quality: 4/5 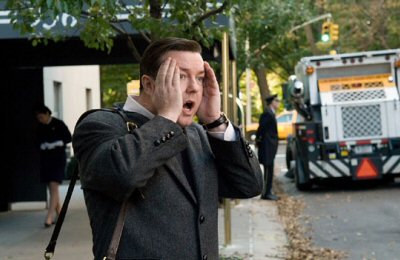 ‘Ghost Town’ is a rather enjoyable romantic comedy that also has some excellent acting. The story is not original, but entertaining. On Blu-ray, the audio and video are excellent with the video being the big surprise. I highly recommend this film as a rental.
Overall Rating: 4/5 (Rental)