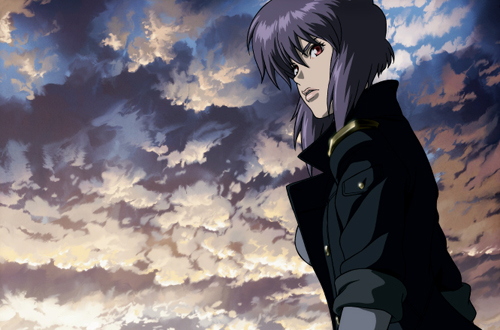 The television movie Ghost in the Shell: Solid State Society (2006) continues the adventures of the cast of Stand Alone Complex, the TV series based on Mamoru Oshii’s watershed feature. It’s been two years since Major Kusanagi left Public Security Section 9 and struck out on her own. Batou pursues only investigations that interest him. Togusa is in charge of the Section, largely by default. All three characters, plus Chief Aramaki and the Tachikoma robots, join in the investigation of a string of suicides by agents of a foreign general. The trail leads them to a terrorist plot involving micro-machines created to release a deadly virus, and to the master-hacker known as the Puppeteer. 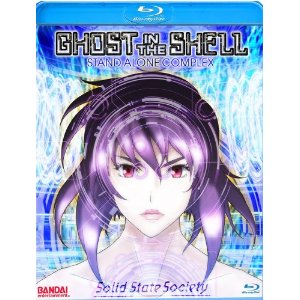 Solid State Society is hopefully a sign of what is to come in the world of Ghost in the Shell. After Stand Alone Complex’s 2nd GIG, I was definitely left with a slightly bitter aftertaste. The pacing of the 2nd GIG felt uneven and the story felt more convoluted than tastefully complex, creating an adequate but not perfect addition to the GitS series. However, Solid State Society takes the best from the Stand Alone Complex series and in little under two hours presents a story as rich in detail and as lovingly complex as the series preceding it.

A huge plus of the movie is that instead of feeling like an overstretched episode, it feels more like a long arc of quality episodes stringed together while still feeling cinematic in its presentation. Solid State Society gives us everything we expect in a GitS story: a sci-fi universe that draws you in but never overwhelms, continuity in character development, rich and intelligent dialogue and plot that almost seems plausible down the road, and of course, some light philosophy and shades of grey. Even if you aren’t an anime or a strict sci-fi fan, you might just enjoy this one.
Movie Quality: 9/10

The print is presented in 1080p/AVC MPEG-4 with a 1:33:1 aspect ratio. Colors are deep and well saturated throughout the entire presentation. Colors are excellent as they tend to pop from time to time. Blacks are strong and almost inky at times. This is a very nice looking animated with excellent details and sharp looking image. The film is quite on the darker side of things, but it never tends to hamper the print.
Print Quality: 9.5/10

Solid State Society was a fine continuation of Stand Alone Complex, it however was a little lacking in the kind of production seen in a theatrical release. The quality was too similar to the that of the TV show, and when you’re taking an animated series and turning it into a movie, it has to be a better than the original format.
Overall Rating: 9/10