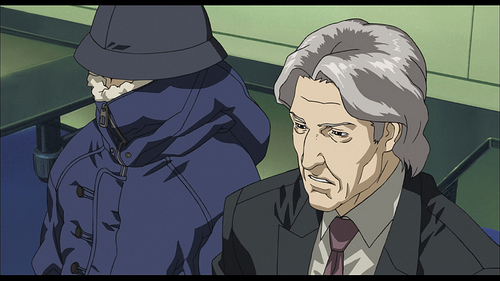 The year is 2030 and six years have passed since a criminal known only as ”The Laughing Man” swept through top medical nanotechnology firms committing acts of cyber-terrorism, kidnapping, extortion, and corporate espionage leaving no known suspects. New information is revealed to Japan’s top homeland security force, drawing Major Kusanagi and Section 9 into the hunt for a suspect capable of hacking the eyes of every operative, obscuring all details of his appearance and leaving behind a trail of copycats and hacked cyborg citizens. 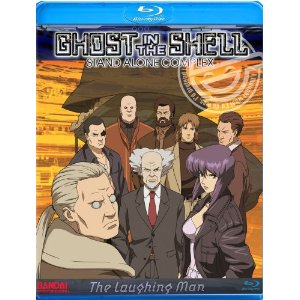 The 2002 broadcast series based on Mamoru Oshii’s landmark film Ghost in the Shell (1995) takes place in a parallel world, where Major Motoko Kusanagi didn’t vanish into The Net. Although its production values are lower, and director Kenji Kamiyama never matches Oshii’s inspired camerawork, Stand Alone Complex does an impressive job of recreating the setting and characters. With the help of the other officers from Public Security Section 9, Kusanagi moves through a deadly city of mecha, cyborgs, humans, and human-prosthetic hybrids. Batou emerges as a more complex and compelling character in the TV series than he was in Ghost in the Shell II: Innocence: He engages the other characters, instead of endlessly quoting philosophers. Politics and cyber-espionage collide in a somewhat tangled plot that centers on the pursuit of The Laughing Man, an über-hacker whose pseudonym is linked to J.D. Salinger’s 1949 story of the same name. The master cyber-criminal leads Kusanagi and Batou into a web of murder and deceit involving bogus cures for “cyberbrain sclerosis” and corrupt government ministers. In the secondary story, the Tachikomas, crab-like robots used by Section 9, develop personalities and an awareness of their existence. The Tachikomas recognize some of the implications of their growing consciousness, but their childish voices–modeled after the performance of Japanese actress Akiko Tamagawa–sound odd discussing philosophical questions. Not surprisingly, the story ends with Kusanagi, Batou, et al. tackling a new case that leads into the 2nd Gig. (Rated 13 and older: considerable violence, violence against women, grotesque imagery, nudity, alcohol and tobacco use).
Movie Quality: 9/10

The print is presented in 1080i/AVC MPEG-4 with a 1:85:1 aspect ratio. Colors are deep and well saturated throughout the entire presentation. Colors are excellent as they tend to pop from time to time. Blacks are strong and almost inky at times. This is a very nice looking animated with excellent details and sharp looking image. The film is quite on the darker side of things, but it never tends to hamper the print.
Print Quality: 9.5/10

All in all SAC does a great job of showing viewers what a future of great technological advances could bring. The good and the bad. From the hijacked tank, to the Geri’s, and even to the terrorist known only as the Laughing Man. Ghost in the Shell SAC shows audiences that anime can be full of action, intelligence, mystery, and humor all rolled into one.
Overall Rating: 8/10