The year is 2030, and an influx of refugees have effortlessly transformed themselves into a terrorist organization known as the ”Individual Eleven.” With a sadistic intent of mass destruction, will they triumph in victory or discover the gloomy pitfalls of defeat? 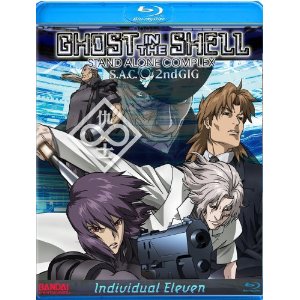 As the Ghost In The Shell: Stand Alone Complex TV series achieved a level of popularity not seen in the franchise since the original GITS anime, a movie followup to the series was a no-brainer. Like some films that act as conclusions to an anime TV series like Fullmetal Alchemist, Ghost Sweeper Mikami, and Nadesico, this brings the entire original cast back together for one last ride.

About two years after the second season of the series(2nd Gig), Matoko has left Section 9 to go work on her own. Since then, Togusa has stopped bleaching his hair and become field commander, while Batou is off being picky about which cases he takes. A foreign colonel kills himself on Togusa’s watch for fear of a master hacker called the Puppeteer. The colonel’s father is an exiled aging dictator under Japanese asylum, who is soon found to be dead by a micromachine virus. Batou goes to arrest someone connected to the virus, but runs into Matoko. He keeps this a secret from the other Section 9 members because he thinks she might actually be the Puppeteer. The investivagation leads into something called the Solid State Society, which is a secret government orginization running under a project titled Noble Rot. where abandonned or orphened children are left to take care of eldery citizens with no one left to leave their inheritence to. The Solid State was actually brainwashing these children and grooming them to be a docile next generation, with the wealth and power coming from their foster parents. They’re also responsible for kidnapping thousands of children from abused families. The true Puppeteer turns out to be an individual A.I. that emerged from the collected consciousness of all the puppet personas that Matoka herself used through prosthetic bodies she controlled over the last few years. The children are then sent back to their families, and Matoko rejoins Section 9.
Movie Quality: 9/10

The print is presented in 1080i/AVC MPEG-4 with a 1:85:1 aspect ratio. Colors are deep and well saturated throughout the entire presentation. Colors are excellent as they tend to pop from time to time. Blacks are strong and almost inky at times. This is a very nice looking animated with excellent details and sharp looking image. The film is quite on the darker side of things, but it never tends to hamper the print.
Print Quality: 9.5/10

This is another classical Ghost in the shell show. Highly recommended to all you Shell fans.
Overall Rating: 8/10