2029: A female cybernetic government agent, Major Motoko Kusanagi, and the Internal Bureau of Investigations are hot on the trail of “The Puppet Master,: a mysterious and threatening computer virus capable of infiltrating human hosts. Together with her fellow agents from Section 9, Kusanagi embarks on a high-tech race against time to capture the omnipresent entity. Director Mamoru Oshii’s award-winning cyber-tech thriller, based on the comic book by Shirow Masamune, is lauded as one of the leading Japanese animation films of all time. . 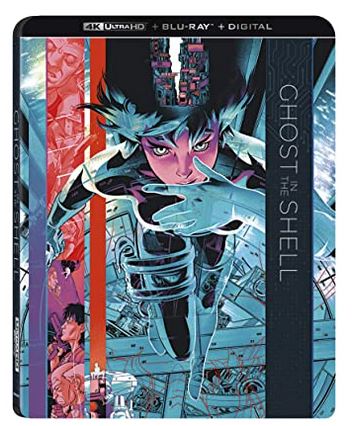 ‘Ghost in the Shell’ has a very cranial plot, so those viewers who think anime is nothing more than flying guts and warped tentacles might as well crawl back into their sewer, because they’re not going to like it. On the other hand, anyone who has seen and appreciated 2001 or Royal Space Force: Wings of Onneamis will love Ghost in the Shell. The movie is much more complex than it actually appears, and has a fascinating plot surrounding the destination of the human soul in the future, although the more memorable images are of rampant gunfire and Motoko Kusanagi’s omnipresent bare breasts. The animation is excellent in both its computer and cel forms, although the character design is very original – and very worthwhile.

‘Ghost in the Shell’ surpasses Akira as a vehicle for the popular display of anime largely because of its more charismatic cast and its fascinating plot. Akira dealt with similar subject matter, had a longer running time, and had the same high-quality animation that ‘Ghost in the Shell’ has, but Ghost is better because it can be widely appreciated not for its spectacle but for its intelligence. Both Akira and Ghost in the Shell had important messages in them. Unfortunately Akira’s violence has become a myth in its own right instead of incidental. Some people will fault Ghost in the Shell for not going to the same extremes. They should stick to Akira. In short, if you want beautiful, intelligent and original anime, ‘Ghost in the Shell’ is for you. It is the showcase that Manga Video promoted, but not in the way they think it is. Still, you don’t want to miss it.
Movie Quality: 9/10

The print is presented in 4K with a 1:85:1 aspect ratio. “Ghost” has been released before on Blu-ray a few years ago, in 2009 and for the 25th Anniversary. On the first two releases on Blu-ray, the film was in 1080i. Colors are much deeper and well saturated throughout the entire presentation. Colors are excellent as they tend to pop from time to time. Blacks are strong and almost inky at times. This is a very nice looking animated with excellent details and sharp looking image. The film is quite on the darker side of things, but it never tends to hamper the print. With this new 1080p print, it really brings out the details in characters faces, city landscapes, and even any writings on signs, buildings, etc. If you own either previous releases, this is a sure upgrade for fans of “Ghost in the Shell”.
Print Quality: 9.5/10

The audio is presented in a Dolby True HD 7.1 mix. This film is a mixture between dialogue and action sequences galore with the score peering into the soundfield. Dialogue was clean through the center channel with a nice degree of depth. This is one bombastic sounding audio mix which sounds so crisp filling the soundfield very nicely. Sound effects are very well paced with some excellent panning effects, especially with guns blazing and bullets ricocheting off the walls it sounds like. This is pretty much a demo worthy audio mix which will not disappoint fans.
Print Quality: 9.5/10

This is an amazing sci-fi on many levels. First the story is generally enjoyable. There is an appropriate mix of conspiracy theory, futuristic tech., and Japanese pop-culture. If you enjoy the video game Deus Ex, then you’d probably enjoy this movie.
Overall Rating: 9/10