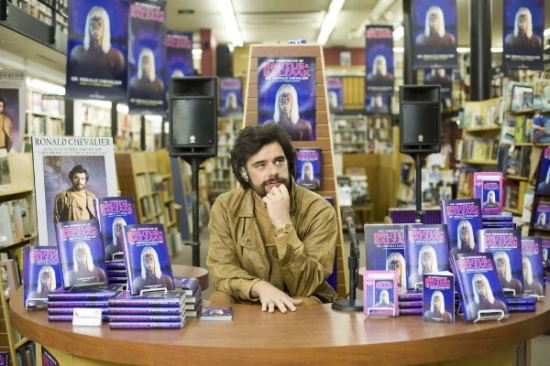 The folks behind Napoleon Dynamite proved themselves to be comedic quirk-masters, and Gentlemen Broncos fits right into Napoleon’s moon boots. Michael Angarano stars as Benjamin, a self-conscious, home-schooled teen whose aspirations of being a science-fiction writer are played out Walter Mitty-style. His doting mother (Jennifer Coolidge) treats him to a weekend at a writing camp, where Benjamin meets his idol, sci-fi author Ronald Chevalier (Jermaine Clement, The Flight of the Conchords). Benjamin submits his “Yeast Lords” manuscript to Chevalier for the big-time writer’s approval. But Chevalier is struggling for a hit book and he promptly plagiarizes Benjamin’s work. Director Jared Hess cowrote Gentlemen Broncos with his wife, Jerusha Hess, and they do a fine job of capturing grimacingly painful, but funny trials of adolescence. The ‘nad jokes and gross-out humor get a little stale, but the Hesses have assembled a brilliant, watchable cast. Angarano gives Benjamin a lovable, nerdy touch. Coolidge chalks up yet another comedic character role, complete with appliquéd sweatshirts and floral vests. Clement nearly steals every scene as the laughingly pompous sci-fi author Chevalier. Mike White turns in a fine performance as Dusty, Benjamin’s mom-appointed guardian angel. Héctor Jiménez (Nacho Libre) and Halley Feiffer round out the cast as friends who want to help make Benjamin’s “Yeast Lords” dream come true by filming an ultra-low-budget, amateur version of his story. As with Napoleon Dynamite, the cast’s clothing is as funny as some of their lines. 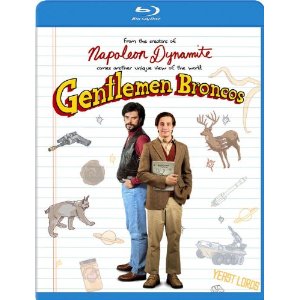 ‘Gentlemen Broncos’ didn’t do well in the theater and because the general consensus of the reviews were negative, it didn’t receive a national release. But the film has this quality similar to “Napoleon Dynamite” of taking that small town look and making the characters looks as if they are somewhat behind on the times, especially when it comes to clothing and fashion styles.

I did find Michael Angarano’s performance as the awkward Benjamin Purvis to be quite interesting. Benjamin is a normal kid but was brought up with not much money and thus he eats vegetables and his popcorn ball. Kudos to Jennifer Coolidge who plays Benjamin’s mother Judith because as you’ll see on the special features, she did a lot of improvisational scenes that even surprised the film crew when it came to dialogue. Jemaine Clement as Ronald Chevalier also did his fine share of improv. As for Sam Rockwell, I was surprised he took this role as Bronco/Brutus but needless to say, he adds star power to this film.

Admittedly, there are a couple of “what the heck” scenes (particularly those involving Halley Feiffer) which I think some will find a bit off-putting if not totally repulsive, but overall the film is chock full of hilarious gems. (The PG-13 rating was due primarily to crude humor. There was one instance where “ape sh**” was used, but no swearing beyond that.)

I thought all of the characters were very well-played by their respective actors. Jemaine Clement’s Ronald Chevalier is often cited as the show-stealer, and for good reason, but I found myself wanting to see more of Sam Rockwell’s Bronco character. His near-hillbilly (fantastic southern accent) action hero portrayal was delightful to watch. I laughed hysterically at his “What the crap?!” reaction upon waking up in Daysius’ lab.
Movie Content: 8/10

The print is presented in 1080p/AVC MPEG-4 with a 1.85:1 aspect ratio. Although this film had a small production budget, the image quality looks good. While the transfer is not going to knock the socks off those looking for an eye popping image, it will satisfy fans of the film. The color palette is vibrant, yet still retains a soft/muted look due to the original print of the film. The film does lack in details. Flesh tones are reproduced naturally.
Video Quality: 8/10

The audio is presented in DTS-HD MA lossless 5.1 mix. The film’s audio is not aggressive by any means. ‘Gentleman Broncos’ is a dialogue driven film with a front heavy presentation. The only time the rears are used in the film is whenever the soundtrack is in effect. Even then, the soundtrack does not have the proper oomph that one would expect.
Audio Quality: 9/10

Honestly for a company that releases independent films they seem pretty wishy-washy. If it’s going straight to DVD than say so, otherwise actually let the movie stand on it’s own and release it nationwide. This movie could have been a real hit in theaters.
Overall Rating: 7/10