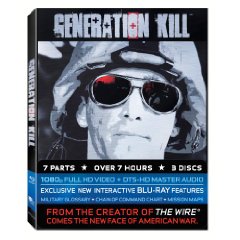 There’s macho, there’s military macho, and then there’s the over-the-top machismo of the Marines. In the HBO miniseries Generation Kill, one character–a Marine–describes his branch of the military as “America’s pitbull.” The seven episodes of Generation Kill follow a battalion of Marines as they lead the invasion of Iraq, ultimately rolling into Baghdad itself by the last show. The language is dense with obscenities and military jargon, but it’s surprisingly easy to follow, even if you don’t study the glossary that comes in a booklet with the box set. What isn’t so easy to distinguish are the characters themselves, except by surface details: This guy has a hoarse voice, this guy is an embedded journalist (a stand-in for Evan Wright, the Rolling Stone reporter who wrote the book the series is based on), this guy is a white supremacist, this guy has a mustache, this guy is an officer obsessed with the other guy’s mustache. The problem is that people are ultimately defined by what they do, and soldiers in war are all doing pretty much the same thing: Shooting, swearing, and sitting around as they wait to shoot and swear some more. But Generation Kill isn’t aiming for personal identification; the creators of the series (David Simon and Ed Burns, producers of the critically-adored The Wire) aim to immerse the viewer in the texture of the experience–which, in this case, is mostly chaos and confusion. Sandstorms are as great a threat as mortar fire; pizza trucks arrive out of nowhere on the brink of a mission (conveniently providing a bit of product placement); and the rules of engagement keep changing as the goals of the higher-ups grow increasing out-of-synch with the war on the ground. Generation Kill captures the frustration and increasing cynicism of the grunt troops with vivid skill, as their simplistic morality–kill the bad guys!–grows more and more hollow. Extras include some brief interviews with real Marines; the usual making-of documentary, mildly interesting but justly deleted scenes, and audio commentaries; and entertaining video diaries from Eric Ladin, the actor who plays the white supremacist.

When I first heard about Generation Kill, I expected it to simply be a glamorized version of the Iraq War where it shows everything working smoothly. What I didn’t expect was a gritty and true story of the 1st Recon Marines during the first wave of the American invasion of Iraq. It didn’t hold back, and honestly I would have hated it if they did. I later found out that this was based on the book written by journalist Evan Wright who followed this company during the initial invasion.

The show focuses around the 1st Recon Marines company as a part of the initial invasion of Iraq that eventually overthrew Sadaam Hussein. It shows the true struggles that the marines went through during this invasion as they struggled with supply shortages and conditions. They are joined by Rolling Stones reporter Evan Wright (Book Author) who’s there to see what really goes on in the Marine Corps. It’s not about Wright or is it even about one particular Marine, it’s rather a show about the entire company and their particular personalities.

This is the more interesting and disturbing nature of the show. A lot of the soldiers displayed appear to have some real mental problems when it comes to their enthusiasm to kill anything in sight, or just their general views of the Iraqi people. It touches upon the civilian killings and how some order were actually made by the higher ups to kill any Iraqi whether they had weapons displayed or not. On one hand I would say it’s wrong to have people with such mental problems i.e. a bit too enthusiastic to kill. On the other hand, if you didn’t have these particular individuals then would we even have an army capable enough to fight such a war.
Movie Content: 9/10 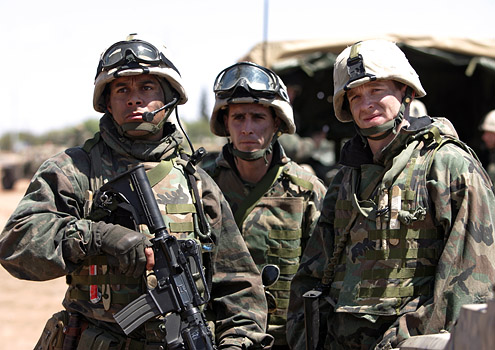 The print is presented in 1080p/AVC MPEG-4 with a 1.78:1 aspect ratio. ‘Generation Kill’ encompasses the gritty atmosphere in content as it does on print. This is one area that some might feel like they are snubbed by the print, but this is how the film was intended to look. I found colors to be strong throughout the entire presentation. Blacks are deep. Fleshtones have a natural look and feel to them. Details are excellent, but there were scenes where a loss of details occurred. It is things like this that could turn off anyone looking for a pristine print. It just adds to the director’s intent to make this a very atmospheric presentation giving the film a documentary look and feel.
Video Quality: 9/10

The audio is presented in DTS HD MA lossless 5.1 mix. This is a mini-series that is mixed between battle and dialogue driven scenes. This is an overly aggressive sound mix. Dialogue is centered properly through the center channel providing a nice deep clarity. During dialogue driven films, this is very important on the depth as I have seen with a few DTS-HD mixes lacking dialogue depth. There are some excellent dynamics during the battle sequences which make you feel like you’re in the middle of the gunfire and explosions. Bullets will whiz by in the rears providing nice panning effects. Bass is just right providing the appropriate amount of bang when an explosion occurs. In no way will you be disappointed with the audio from this mini-series.
Audio Quality: 9.5/10 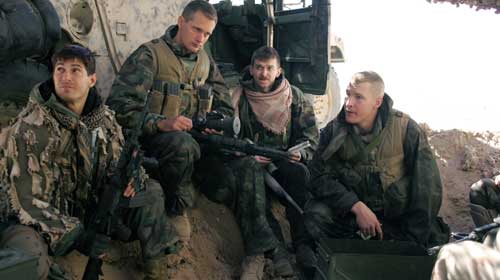 This is a rather impressive set of content available for ‘Generation Kill’ on Blu-ray. I found the six audio commentaries to be very informative covering different aspects of the show. There are also a few features that are in high definition and two that are in standard definition. HBO Home Video churns out another great set of features.

Like ‘Band of Brothers’ before it, ‘Generation Kill’ is an excellent mini-series on current events following the true story of the 1st Recon Marines during the first wave of the American invasion of Iraq. I saw this mini-series originally when it aired on HBO and having the pleasure to view this on Blu-ray is a real treat. The video offers a stylized presentation to the print that works so well with the audio quality to make this one overall atmospheric treat from start to finish. If you were a fan of ‘Band of Brothers’ or like war films in general based on true events, I highly recommend ‘Generation Kill’.
Overall Rating: 9/10