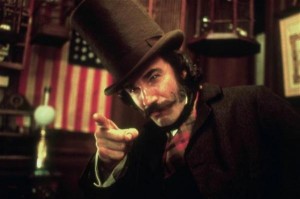 Gangs of New York may achieve greatness with the passage of time. Mixed reviews were inevitable for a production this grand (and this troubled behind the scenes), but it’s as distinguished as any of director Martin Scorsese’s more celebrated New York stories. From its astonishing 1846 prologue to the city’s infernal draft riots of 1863, the film aspires to erase the decorum of textbooks and chronicle 19th-century New York as a cauldron of street warfare. The hostility is embodied in a tale of primal vengeance between Irish American son Amsterdam Vallon (Leonardo DiCaprio) and his father’s ruthless killer and “Nativist” gang leader Bill “the Butcher” Cutting (Daniel Day-Lewis, brutally inspired), so named for his lethal talent with knives. Vallon’s vengeance is only marginally compelling; DiCaprio is arguably miscast, and Cameron Diaz (as Vallon’s pickpocket lover) is adrift in a film with little use for women. Despite these weaknesses, Scorsese’s mastery blossoms in his expert melding of personal and political trajectories; this is American history written in blood, unflinching, authentic, and utterly spectacular. 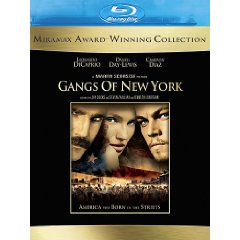 For a movie that was almost 3 hours, I never managed to get bored. Viewers will love to hate Daniel D. Lewis in this role. What a performance! Many ancestors could have been part of these gangs. How people survive the times is a thought that comes to mind while watching. I can only hope that the violence depicted in the film was somewhat inflated. Have things changed since the late 1800s? Sure, but gangs still exist and corruption is more rampant than ever. In the 1840s. Natives and Irsih Americans fight to the death in New York, resulting in the death of Irish leader Priest Vallon (Liam Neeson) and Native Bill The Butcher’s (Daniel Day Lewis) undisputed rule of the city’s criminal underworld. Vallon’s son, Amsterdam (Di Caprio) escapes. And after growing into an anonymous young man, returns to reap his revenge, yet unwittingly becomes the butcher’s protégé.

Scorsese was bringing a long treasured project to the screen with Gangs, creating a hype that suffered from setbacks, delayed releases and mixed reviews. In hindsight what we have is no masterpiece, but it remains an undeniably good film, with many fine qualities to make up for its flaws.

Scorsese’s recreation of the city is stunning: the level of detail completely immerses the viewer into an atmosphere scarcely read of in History books. Moreover, the rich criminal world depicted here maintains a delicate balance of understandability and chaos. Scorsese couples this with his flair for music to create a truly intoxicating mood. The photography reinforces the overall effect tenfold, wonderfully sustained and carrying scattered sparks of pure genius. For example: in one shot, Scorsese pans from newly arrived immigrants who are welcomed, given the nationality, provided a uniform, and enlisted into the Union army to coffins of dead soldiers being unloaded on another peer.

Ultimately, a film lives or dies by its screenplay and acting, and herein lies Gangs of New York’s polarizing point. Whether you focus on the slightly uneven story (oddly shortened in places by pressured editing) or the fantastic performances will determine whether Gangs makes it or breaks it, but for its sheer visual power and acting it deserves to be seen. Leonardo DiCaprio, Cameron Diaz, Brendan Gleeson and John C. Reilly are all a joy to see when on top form, but the true feast here is Daniel Day Lewis’s grand-standing, violent and xenophobic Bill The Butcher. A role that Robert De Niro (for whom it was originally intended over the years). The chances of this film becoming a favorite are slim, but at the very least you’ll walk away with an indelible character to remember.
Movie Content: 9.5/10

The print is presented in 1080p/AVC MPEG-4 with a 2.35:1 aspect ratio. I can’t believe what a difference between this latest release on Blu-ray and the first release. It is a shame that this was not the original release though. This print no longer looks like a grainy and muddy mess as the previous release did. Colors look good providing a solid color palette. Black levels are also fine, and actually stands out more this time. Flesh tones are accurate and natural. There is still some grain, but it is subtle throughout helping fit in with the film’s overall feel and tone. All of the issues like artifacts, white specs, and heavy grain to name a few things are finally gone. This is a nice remastering of an excellent film.
Video Quality: 9/10

The audio is presented in DTS-HD MA lossless 5.1 mix. The previous release had a PCM audio mix, yet I didn’t notice much of a difference here with this new DTS mix. This mix takes advantage of the soundfield with your entire surround working during the scenes during the fights in the film. Bass also plays an integral part during the tense scenes and it isn’t over powering either. The dialogue came through very clean and crisp through the center channel, and is a well balanced mix where I never had to adjust the volume to listen to the dialogue.
Audio Quality: 9/10

It’s a unique film with its deciption of the era, and its striking visual imagery is astonishing. As many people are dismissive of this masterpiece, the unusual period is at least arresting as the story itself. It may be flawed with the love-interest between Diaz, and DiCaprio, but Daniel Day Lewis characterization of Bill the Butcher is riveting. If you own the previous Blu-ray release, you owe it to yourself to upgrade since this new disc offers a huge upgrade in the video department.
Overall Rating: 8.5/10