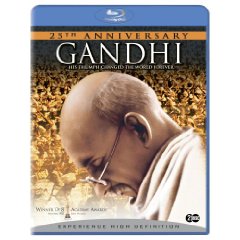 To see Gandhi as he transforms himself (or is he transformed by others?) from Mohandas K. Gandhi, Lawyer, into Mahatma Gandhi, Revolutionary, is a testament to his strength and wisdom – it also shows a great deal of his cunning! Witnessing Mohandas’ inner struggle in the early years in South Africa when he first began using civil disobedience also humanizes this transformation, and shows that even a man as dedicated as Gandhi sometimes can be afraid. Seeing his momentary trepidation at the Indian Card Burning rally showed both his resolve and its costs.

All of these characteristics are brought to the screen wonderfully by Ben Kingsley, who was born to play this part. Amazingly enough, this is Ben’s first major role, and to put it lightly, he nailed it. Seeing newsreels of Gandhi and viewing Kinsgley’s performance is like viewing two of the same thing. Gandhi’s use of passive resistance brought the British Empire to its knees, and served as a blueprint for many of the leaders that we admire today, such as Martin Luther King, Jr. and others.

This is the movie to watch if you want to get down to fundamentals; Gandhi’s three basic lessons of war and peace as shown so beautifully here are these: 1) the only devils are in our own minds; 2) the separation of Pakistan and India, like the separation of Palestine and Israel, violated the civil order between Muslims and Hindus, and destroyed all that Gandhi had achieved: peaceful coexistence of peoples within a single nation; and 3) in the end, after great pain, truth and love inevitably triumph.

One of the drawbacks, since the movie was partialy subsidized by the Indian Government, I am a little suspect about the portrayal of the Muslims in the movie, particularly Mr. Jinnah. Although I know next to nothing of the real Jinnah, the fact that the portrayal of the founder of the state of Pakistan was financed by the government of Pakistan’s arch-enemy causes me to take the portrayal at a little less than face value. It’s a little like George W. Bush financing a Hillary Clinton biopic.
Movie Content: 4.5/5 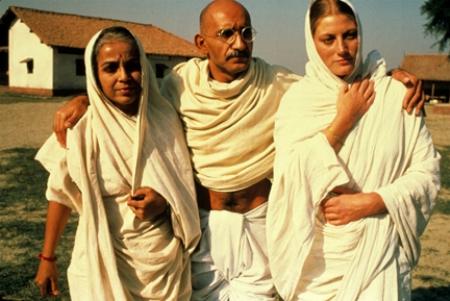 The print is presented in 1080p/AVC MPEG-4 with a 2.35:1 aspect ratio. The film’s cinematography looks very nice in high definition. The color palette is a tad bit on the softer side, yet still maintains a rather detailed print. Details are also excellent for a film that is 25 years old with fine detail such as the piling on Gandhi’s shawl. Flesh tones are accurate and natural looking with no signs of edge enhancement or DNR. Having originally seen this film on DVD, the print has received a nice cleanup removing the print damage and artifacts.
Print Quality: 4/5

The audio is presented in Dolby TrueHD 5.1 mix. This feature film presents both dialogue heavy scenes and a few moments of ambient sounds in the soundfield. The surround channels present reinforcement of the score and do a surprisingly good job providing ambience and occasional sound effects to immerse viewers in the scene. Audio quality is terrific, with clear dialogue and crisp score and sound effects.
Audio Quality: 4/5 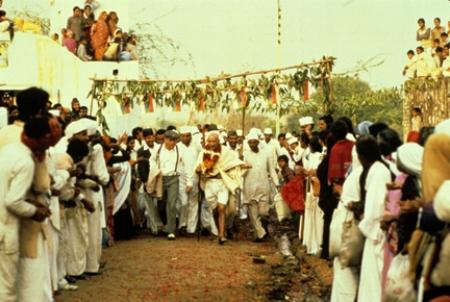 Fans of the film will be happy to know that all the special features from the previous 25th Anniversary DVD release from 2007 have been ported over to the Blu-ray. On disc one, there is also a Blu-ray exclusive featurette which is a nice refreshing special feature to this set.
Special Features: 4.5/5

‘Gandhi’ is a film that truly deserved all the awards it was bestowed, and it is one that is educational as well as enjoyable. I would recommend an upgrade over the previous DVD release due to great video and audio. This may not be a film for everyone, but I would recommend a rental at the most to learn about one of the good souled men to ever grace this earth, ‘Gandhi’.
Overall Rating: 4/5