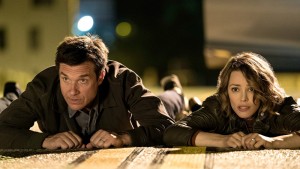 Jason Bateman and Rachel McAdams star as Max and Annie, whose weekly couples game night gets kicked up a notch when Max’s charismatic brother, Brooks (Chandler), arranges a murder mystery party, complete with fake thugs and faux federal agents. So, when Brooks gets kidnapped, it’s all part of the game…right? But as the six uber-competitive gamers set out to solve the case and win, they begin to discover that neither this “game”— nor Brooks—are what they seem to be. Over the course of one chaotic night, the friends find themselves increasingly in over their heads as each twist leads to another unexpected turn. With no rules, no points, and no idea who all the players are, this could turn out to be the most fun they’ve ever had…or game over. 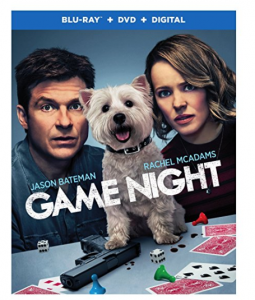 Max (Jason Bateman) and Annie (Rachel McAdams) meet in a bar trivia night. They bond over their competitive nature and their love of games. The couple marries. Their creepy next door neighbor Gary (Jesse Plemons) is desperate to get into their game night after his wife left him. Max is stressed with the arrival of his superior bossy older brother Brooks (Kyle Chandler). Brooks proposes a kidnapping game. When Brooks is really kidnapped, the gang thinks that it’s all part of the game.

Bateman and McAdams are solid comedic actors. They’re more fun than I expected. They simply work as a couple. The concept is great and somewhat different. Lamorne Morris and Kylie Bunbury are good. The Denzel thing is fun although there is one or two awkward unfunny moments. Jesse Plemons is good at his dead-eye creepiness. I have some problems with the Sharon Horgan and Billy Magnussen coupling. I like Horgan but I don’t believe she would stick with Magnussen’s character. He’s annoying and bad at playing outrageous. He’s the weak spot on the roster. There is one or two too many turns on the fake kidnapping take. It wears out its welcome rather than being a funny call back. Overall, I like most of this movie with a couple of reservations.

The print is presented in 1080p/AVC MPEG-4 with a 2.40:1 aspect ratio. The print looks very good throughout without any apparent issues. Colors are vibrant and carry pop which brings out the fine details. The detailed scenes stand out very well. Blacks are deep. I found the print to be crystal clear with no artifacts or print damage. There is a nice mixture of outside and inside scenes with ‘Game Night’, but the outside scenes use of natural lighting really shows off the print.
Print Quality: 9/10

The audio is presented in a DTS-HD MA l0ssless 5.1 mix. With many comedies, they never truly take advantage of the soundfield. The same can be said in some instances with ‘Game Night!’ considering that it is more of a front heavy experience. When the soundtrack comes into play, especially during the party scenes, it really fills up the soundfield. Dialogue is clear and crisp through the center channel.
Print Quality: 9/10

Overall not a bad way to spend a couple of hours, especially if you like watching Jason Bateman and Rachel McAdams.
Overall Rating: 7/10