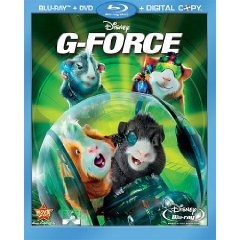 G-Force just might be the best Jerry Bruckheimer action film in many a moon. The film is exuberant, and its premise–don’t think big for an animated caper film, think small–brilliantly upends the more-bigger-faster trope of American action films… with cute, little, furry guinea pigs.

Bruckheimer, the action genius behind the likes of the Pirates of the Caribbean, Con Air, The Rock, Armageddon, and many more, here teams with visual effects maestro Hoyt Yeatman, who writes and directs. The combo is potent, and the fact that they streamed their blow-’em-up vision through a film about tiny rodents saving the world makes the whole confection a hilarious family-friendly experience as well as a satisfying action adventure. The premise isn’t earth-shattering: oddball, unexpected heroes are called on to save the day (Men in Black, Underdog, etc.). But the lowly guinea pig has been long overdue to get its moment in the spotlight. And now the free world knows whom it can really trust. The film mixes the animated heroes with real-life actors, including the sardonic British character actor Bill Nighy, who plays an evil mogul out to take over and/or destroy the world. The U.S. government, it turns out, has been nurturing a special squad for occasions just such as this. It’s just that it’s been nurturing them in small pens with wood shavings on the floor and running wheels for exercise. Will Arnett, deadpan and spot-on, plays the human agent who has the unenviable task of wrangling the guinea pig G-Force, and is a deft foil for the bad guys as well as for the mini-heroes.

The premise is light-hearted, if completely uninspired. A technical expert named Ben (Zach Galifianakis) has trained three guinea pigs, a mole, and a fly to be secret agents. The guinea pigs are Darwin (voiced by Sam Rockwell), Juarez (voiced by Penélope Cruz), and Blaster (voiced by Tracy Morgan). The mole is Speckles (voiced by an unrecognizable Nicholas Cage). The fly is Mooch, who serves mostly as surveillance. They’re all equipped with tiny electronic devices you’re not supposed to question the plausibility of, such as night-vision goggles, PDAs, handheld blowtorches, parachutes, laptops, and earpieces for communication. Hoping to impress the FBI and become their own special task force, they’re assigned to infiltrate the home of a powerful billionaire named Leonard Saber (Bill Nighy), who plots to take over the world with his line of household appliances.

Joining the adventure at one point or another are a flatulent guinea pig named Hurley (voiced by Jon Favreau) and a temperamental hamster named Bucky (voiced by Steve Buscemi). Hurley clings to Darwin like someone in desperate need of a friend and is always hungry. There’s a reason for this, but I don’t think it matters one way or the other.

At a certain point, Blaster decides to call his team G-Force, although he never says what the G stands for. Is it safe to assume that it means Guinea Pig? No, that would be GP-Force. Anyway, as they attempt to stop Saber, they’re pursued by an FBI team led by Agent Kip Killian (Will Arnet), who feels that talking guinea pigs will compromise their own mission to stop Saber. This eventually leads to a frenetic chase sequence involving squad cars and highly mechanized plastic hamster balls; they zoom around the street of Los Angeles until they go right through an active fireworks display.
Movie Quality: 7.5/10

The print is presented in 1080p/AVC MPEG-4 with a 2.40:1 aspect ratio. Some parts of this animation are impressive, while others the CGI does not look as good. This is a very colorful film that is vibrant and pops. With a strong color palette, it brings out the fine details. Black colors are deep looking. Taking all these strong elements, they produce one sharp looking picture. My only complaint again is just some of the CGI is not as detailed.
Video Quality: 9/10

The audio is presented in DTS-HD MA lossless 5.1 mix. With this mix, all my speakers were working for their money. The dialogue comes out of the center channel very clean and crisp. I found the balance to be mixed very well between the soundfield and dialogue. I am glad that finally more and more releases on Blu-ray are coming with well balanced audio mixes.
Audio Quality: 9/10

As with any good kids’ movie, there’s enough wit to keep the grown-up amused. The “you can if you try” message comes across as heavy handed at one point and a plot reversal seems abrupt, but those things seem minor. It’s a cute popcorn movie for the kids.
Overall Rating: 7/10