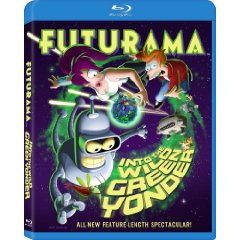 The final film in the Futurama series caters the most to diehard fans. The gags, characters, running themes, and inside jokes fuel the majority of the show, leaving the usual creative science fiction parodies rather lacking. Familiarity with the regular crew of the Planet Express is essential for Into the Wild Green Yonder, although many of the funniest riffs belong to the severed head of Richard Nixon, who is once again the president (of Earth) – for which you only need to be well-versed in his shortcomings.

Popular Mars Vegas is demolished for New Vegas, an even more luxurious gambling paradise, run by Amy’s wealthy father Leo Wong. Leela (Katey Sagal) becomes concerned with the destruction of the environment and wildlife from Wong’s building plans, and sets out to save the Violet Dwarf star, a lush, inhabited planet full of life that marks the final demolition zone for a giant miniature golf course being constructed as the central attraction for New Vegas. After she saves the very last desert muck leech from extinction, she becomes the leader of a band of protesting environmentalists (eco-feminists) determined to put a stop to the devastating development.

Meanwhile, Fry (Billy West) discovers he’s a mind reader, and is introduced to a secret underground organization known as the Legion of Madfellows. He realizes that it is also his destiny to save the Violet Star, despite the rising forces of government (in the form of Nixon’s head) and space police (the overconfident Captain of the Nimbus, Zapp Brannigan) bent on stopping both Fry and the pesky eco-feminists. Wildcard robot Bender (John Di Maggio) plays all sides for his own selfish, despicable gain (as usual), while having an affair with the Donbot’s wife Fanny.

Into the Wild Green Yonder does the best job of all four Futurama films in concealing the fact that it is several episodes tied together, creating a fairly linear storyline that doesn’t deviate as much in common goals and plots for each of the characters as the previous movies.
Movie Content: 4/5 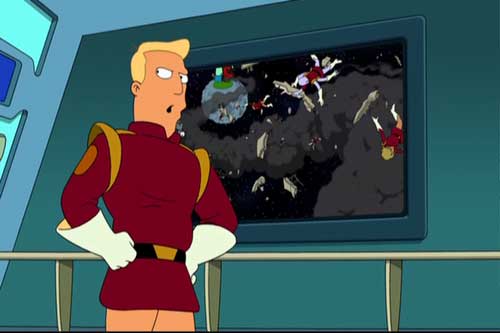 The Blu-ray print is presented in 1080p/AVC MPEG-4 with a 1.78:1 aspect ratio. The Blu-ray version of the film looks very good with a very rich color palette. Colors are vibrant with popping visuals. For an animation, details look very good making this a very sharp looking picture.
Print Quality: 4/5

The audio is presented in DTS-HD MA lossless 5.1 mix. The soundtrack is not anything that would make you scream demo material. The audio shines anytime there is music coming from the surrounds sounding clean. Dialogue was well positioned to the center channel and came through very clear.
Audio Quality: 3.5/5

‘Futurama: Into the Wild Green Yonder’ is the best of the four films to have been released over the last few years. Fans of the ‘Futurama’ franchise will be excited to pick up this title to finish off their collection.
Overall Rating: 3.5/5