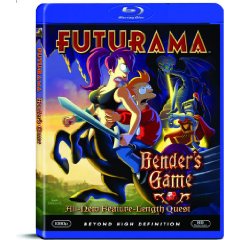 ‘Futurama’ is one of those FOX shows that were cancelled prematurely. This has happened to many beloved television shows on FOX over the years. ‘Futurama’ was placed in an inconsistent timeslot which the show lost viewers. In August 2003 the show would get canceled, causing uproar amongst fans. With time and patience, the fans showed FOX with their wallet that this is a show that still has a huge fan base. With the DVD set releases being so successful, this would resurrect the show back from the dead.

This is the third direct to DVD ‘Futurama’ feature film, with ‘Bender’s Big Score’ and ‘The Beast With A Billion Backs’ being the first two films. While the revival of the series with the first film wasn’t the same ‘Futurama’ that we loved, at the time it was better than nothing. The direction of the series would change hurting the product to a degree. With ‘Bender’s Games’ there were promised changes for the series for the better as we moved from a sci-fi them and more of a medieval like fantasy world.

During a game of ‘Dungeons & Dragons’, Bender is picked on by everyone which his imagination starts to go into overtime. We take a ride through Bender’s imagination during the film which encompasses the fantasy theme. Bender ends up being placed into the HAL Institute for being insane. While this is going on with Bender, Professor Farnsworth talks about an energy crystal that would take dark matter to be turned into fuel. Mom is using dark matter for the great of bad. Then we get transported into this fantasy world. It helps that this is a new unique direction for ‘Futurama’ as it will help give better direction and a whole new environment to deal with.

Print/Audio Quality
The Blu-ray print is presented in 1080p/AVC MPEG-4 with a 1.78:1 aspect ratio. The Blu-ray version of the film looks very good with a very rich color palette. Colors are vibrant with popping visuals. For an animation, details look very good making this a very sharp looking picture. The audio is presented in DTS-HD MA lossless 5.1 mix. The soundtrack in ‘Bender’s Game’ is not anything that would make you scream demo material. The audio shines anytime there is music coming from the surrounds sounding clean. Dialogue was well positioned to the center channel and came through very clear.

The DVD print is presented in 1.78:1 anamorphic widescreen. The problem I ran into with the DVD version is that I received a screening copy that was different from the regular screeners. The print quality wasn’t as good as the last two DVD releases due to the screener. To try and give an accurate review of the DVD picture quality, I would be giving out false information. The audio is presented in Dolby Digital 5.1 and I found the audio to be good for DVD. Like the Blu-ray, I found the audio to be good in the same areas, except it was lacking that punch that high resolution audio brings to the table.

‘Futurama’ is an enjoyable television show and with the third film in the series, this is a rather refreshing new chapter with the change in direction. If you are a fan of the show, both the DVD and Blu-ray version are excellent. The Blu-ray version trumps the DVD via audio and picture quality, so if you have the option of choice, the Blu-ray is superior.