From Prada to Nada Blu-ray Review 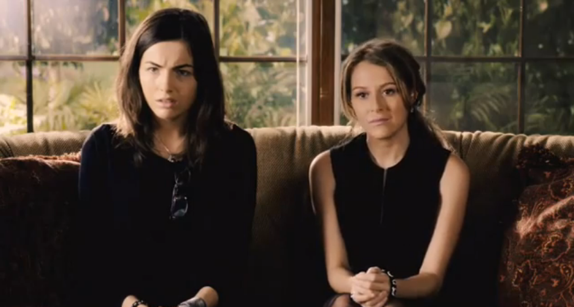 From Prada to Nada is a romantic comedy, a social commentary about America’s class system and Latino culture in America, and a modern retelling of Jane Austen’s classic novel Sense and Sensibility. The definition of true wealth varies from person to person; to some it means designer labels and fancy cars, to others a caring family, or a strong connection with one’s culture. Well-to-do sisters Nora and Mary are opposites in every way, from their long-range goals to their choices in clothing. While Nora has a strict 10-year plan that avoids romance in favor of law school and a law career, Mary is into shopping, status symbols, and dating wealthy, good-looking boys. When their father dies unexpectedly, Nora and Mary find themselves alone, penniless, and united in a common battle to survive. A kind aunt takes them in, but her place in East Los Angeles is a far cry from their elegant home in Beverly Hills, and her way of life couldn’t be more different from what they’re accustomed to. Besides being forced to give up things like Prada bags and enrollment in law school, Mary and Nora are thrown into a decidedly unfamiliar Latino culture about which they find they have many misconceptions. From Prada to Nada is effective on three very different levels: it does a good job of exposing the dichotomy between the wealthy and the poor in America, of authentically portraying what it’s like to be Latino-American, and of taking a classic story and making it modern and accessible. 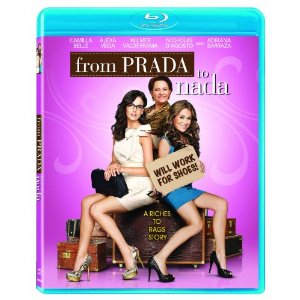 Bell and Vega play Nora and Mary Dominguez, young sisters living carefree, fabulously wealthy lives in Beverly Hills. When their father suddenly dies of a heart attack (on his birthday, of all days), they discover he was an irresponsible risk-taker and was ready to file for bankruptcy. This, in effect, renders his will meaningless. They also learn of his illegitimate son, Gabriel (Pablo Cruz), whose fiancée, the venomous Olivia (April Bowlby), callously evicts the sisters with little more than the clothes on their backs. Penniless and orphaned, they’re forced to move away from the sheltered affluence of Beverly Hills into the modesty of East Los Angeles, where they take residence with their aunt, Aurelia (Adrianna Bazzara).

Nora, the more responsible and less materialistic of the pair, adjusts fairly well to the new neighborhood. To make ends meet, she quits law school and takes a job at a law firm, where her boss is Edward (Nicholas D’Agosto), Olivia’s kindly but reserved brother. The romantic tension is underwhelming but obviously significant to the story, so we’re made to notice even if they have little if any chemistry. Nora keeps Edward at a distance, since falling in love doesn’t gel with her ten-year plan. When they’re not dancing around the issue of their feelings, they’re handing a case that Nora landed during a bus ride to work, because let’s face it, that’s how all lawyers find clients; a group of Hispanic janitors, who were fired for allegedly stealing cleaning supplies, want to sue their former employer for wages that amount to an hour’s less work than they put in.

The movie displays a clear sense of humor when it comes to Mexican stereotypes, and admittedly, some of them are funny. My favorite gag was when Aurelia sees Edward at her door and panics, believing him to be an immigration officer; her relatives, who work in a makeshift clothing factory in the living room, frantically hide their sewing machines and turn the television to a channel showing a Dodgers baseball game. Many of them, however, are not all that funny; my least favorite was a recurring joke about Mary and Nora not being able to speak Spanish, despite the fact that they live in Los Angeles. They represent a thematic undercurrent, namely the sisters learning to embrace their Hispanic roots.

The print is presented in 1080p/AVC MPEG-4 with a 2:35:1 aspect ratio. Colors are deep and well saturated throughout the entire presentation. Blacks are strong and almost inky at times. Nowhere did the image ever appear soft with such strong colors and black levels. Flesh tones were also natural. There is some subtle aliasing in a few scenes, but never a huge distraction. Fans of the film will not be disappointed.
Print Quality: 8.5/10

The audio is presented in a DTS-HD MA lossless 5.1 mix. ‘From Nada to Prada’ is a dialogue-driven film that is mostly front and center channel driven. There really wasn’t anything that stood out, audio-wise especially for the surround channels. If anything, it’s all about the dialogue and the dialogue on the lossless soundtrack is crystal clear. I detected no hiss or any audio problems while watching the film.
Print Quality: 9/10

A film about cultural discovery and self-acceptance is perfectly fine. But “From Prada to Nada” is at heart a romantic comedy, a genre so innately preposterous that anything serious or compelling is overshadowed. Furthermore, the material is about as predictable as it can get.
Overall Rating: 8/10