From Dusk Till Dawn Blu-ray Review 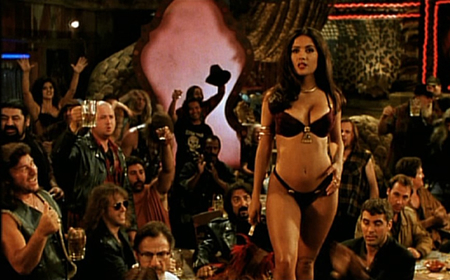 Its nonstop thrills when George Clooney (The American) and Quentin Tarantino (Pulp Fiction) star as the Gecko brotherstwo dangerous outlaws on a wild crime spree. After kidnapping a father (Harvey Keitel, Little Fockers) and his two kids (including Juliette Lewis, Due Date), the Geckos head south to a seedy Mexican bar to hide out in safety. But when they face the bars truly notorious clientele, theyre forced to team up with their hostages in order to make it out alive! From Robert Rodriguez and Quentin Tarantino, the creators of Grindhouse, From Dusk Till Dawn is explosive action entertainment!. 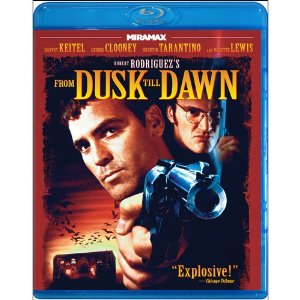 You can also check out our Canadian Alliance Blu-ray Review from January 2009.

Robert Rodriguez and Quentin Tarantino have had some very interesting and exciting film releases over the last few years in the action, crime, and horror genres. One film still stands out very well nearly 13 years later. With all the gore, foul language, nudity, and violence it made ‘From Dusk Till Dawn’ one of the best exploitation films in years. With a US total box office gross of $26 million dollars, the film was rather successful and even more so once it hit home video. ‘From Dusk Till Dawn’ was originally supposed to release here in the United States on Blu-ray in the Fall 2008, but there was a delay without notice. I am here reviewing the Canadian Import version of the film.

Seth (George Clooney) and Ritchie Gecko (Quentin Tarantino) are criminals that are on the run from the law in Texas for a path of destruction that they have left behind. Their goal is to get past the authorities and make it to Mexico in time to be free men. Along the way, they run into a few problems of their own that halt their trip to Mexico by a few days. Seth is a thief while Ritchie is a psychopathic rapist/serial killer. Seth is the smarter and calmer of the two as he thinks out his every move. Ritchie is a bit of a problem as he allows his temper to get the best of him and into trouble.

The film opens with a bang as the boys try to rob Benny’s World of Liquor store which also has the local sheriff (Michael Parks) make an appearance. The banter between the store clerk and the sheriff is just plain awesome that needs to be seen. It is classic Tarrantino dialogue. Then holy hell unleashes in the liquor store when Ritchie begins to lose his cool with the store clerk because he thought that he was tipping the sheriff off. This has to be one of the coolest gun fights within an enclosed area that I have seen in a film and adding a rather explosive finish to the liquor store by the time its all said and done.

As the brothers escape the added mess that they created at the liquor store, an ex-preacher (Harvey Keitel) and his two kids (Juliette Lewis and Ernest Liu) are driving in an RV on a family trip. They stop at a motel to rest which is the same motel that both Seth and Ritchie are staying at for the night. Seth and Ritchie decide that they are going to kidnap the family and make the father drive them into Mexico. Things get tense once at the border as the border patrol is checking every single vehicle for the Gecko brothers. They do end up crossing the border after a few issues at hand. Once they are in Mexico, they stop over to the Titty Twister, which is a strip bar out in no man’s land. The brothers cause all kinds of issues going into the bar, which aggravates the employees at the bar. They do not know that these employees are vampires thirsting for blood. All the humans in the bar must join together to stop a bloodbath from occurring once the vampires start attacking them.

The talent involved was phenomenal in this film and this goes from all the A-list to B-list stars involved. I didn’t even mention Cheech Marin, Tom Savini, Salma Hayek, Danny Trejo, and Fred Williamson as some of the actors involved in this film. Both Tarantino and Rodriguez pull off a classic film here with their screenwriting, directing, and acting. Then add the rest of the cast that really pulled their weight here and everyone were having a blast. This is one of those films that is steering you in one direction, and then all of a sudden hits you dead smack taking you in another direction.
Movie Quality: 9.5/10

The print is presented in 1080p/AVC MPEG-4 with a 1:78:1 aspect ratio. This transfer is just all over the place. You could be in one scene where the image looks great and then in the same scene you know the image quality just doesn’t look quite right. They cleaned up a most of the noise I remember seeing in the Alliance version where some scenes were downright bad within seconds of each other. One good scene is in the beginning when Richard uses duct tape on his hand, the clarity is almost cheap DVD quality. There is some considerable DNR it is rather apparent considering how strong the orange to red colors are in this film with flesh tones and even several of the signs. Fleshtones run awfully hot to the point where I thought that everyone had taken tanning lessons before filming. The kicker to all of this is that the hot flesh tones can be hot looking in one scene and then the next scene they do not look as hot. Blacks are crushed for sure, just looking at Seth’s jacket alone in some scenes there are no details. I feel like colors have this strong but muddy look to them. Detail and clarity is yet another issue with this film as there are some scenes where details are very good and then we get hit with a scene that has no details and all of clarity is like watching a cheap DVD. This is very noticeable during any scenes where we see signs outside the Titty Twister, inside the Titty Twister, and the restaurant Harvey Keitel’s family is dining in.

Grain and noise that was a part of the Alliance release are nowhere to be found, except for some scenes at the beginning and towards the end where there is some very light grain. All of the issues with the Alliance release which had dirt and white specs throughout that bothered me with the Canadian version are nowhere to be found here. Again, this is much better than the 2 disc DVD release, but still not as consistent as the Canadian Alliance release from 2008. I am utterly confused with Echo Bridge with how they have just released these films like this to make a buck. I think that both the Alliance release and the Echo Bridge have plenty of faults that could deter anyone from purchasing either at this point, but if you have a choice go Canadian, go Alliance.
Print Quality: 4/10

The audio is presented in a DTS-HD MA lossless 5.1 mix. The audio mix is the saving grace here which is actually pretty good considering these guys ripped us off when it comes to Halloween H20 and The Crow City of Angels. The soundtrack makes good use of the mix and fills the soundfield. I found this mix to be rather aggressive with tons of explosions, shots being fired, stakes being driven through the vamps, and a lot of hard hitting action. I ended up finding this mix to be a bit more front heavy vs. the Alliance release which filled the entire soundfield at all times when there was action. The rears do get some action, but do not feel like they are being full utilized like they should be. The other issue is that I never felt like the audio was explosive in certain scenes that should have been. Dialogue is clean through the center channel with no issues at all. Again like the Alliance release, the audio mix is much better than the video presentation.
Print Quality: 6/10

‘From Dusk Till Dawn’ is an excellent film by Robert Rodriguez and Quentin Tarantino which covers many different genres. I feel like I am here again like in January 2009 with my original review of the Alliance release talking about how the video presentation of the Blu-ray is a mixed bag, but worse. It is like Echo Bridge corrected a few mistakes made by the Alliance release, but went ahead and introduced a new set of issues with lack of details and clarity from scene to scene. The real saving grace is the audio mix which is aggressive and bombastic. Then add that there are no special features which ends up hurting this release from being serviceable until a better version comes along. If you are a fan of this film and do not have access to buying the Alliance release, try to rent this one first if you can before spending your $10.
Overall Rating: 5/10