Robert Rodriguez and Quentin Tarantino have had some very interesting and exciting film releases over the last few years in the action, crime, and horror genres. One film still stands out very well nearly 13 years later. With all the gore, foul language, nudity, and violence it made ‘From Dusk Till Dawn’ one of the best exploitation films in years. With a US total box office gross of $26 million dollars, the film was rather successful and even more so once it hit home video. ‘From Dusk Till Dawn’ was originally supposed to release here in the United States on Blu-ray in the Fall 2008, but there was a delay without notice. I am here reviewing the Canadian Import version of the film.

Seth (George Clooney) and Ritchie Gecko (Quentin Tarantino) are criminals that are on the run from the law in Texas for a path of destruction that they have left behind. Their goal is to get past the authorities and make it to Mexico in time to be free men. Along the way, they run into a few problems of their own that halt their trip to Mexico by a few days. Seth is a thief while Ritchie is a psychopathic rapist/serial killer. Seth is the smarter and calmer of the two as he thinks out his every move. Ritchie is a bit of a problem as he allows his temper to get the best of him and into trouble.

The film opens with a bang as the boys try to rob Benny’s World of Liquor store which also has the local sheriff (Michael Parks) make an appearance. The banter between the store clerk and the sheriff is just plain awesome that needs to be seen. It is classic Tarrantino dialogue. Then holy hell unleashes in the liquor store when Ritchie begins to lose his cool with the store clerk because he thought that he was tipping the sheriff off. This has to be one of the coolest gun fights within an enclosed area that I have seen in a film and adding a rather explosive finish to the liquor store by the time its all said and done.

As the brothers escape the added mess that they created at the liquor store, an ex-preacher (Harvey Keitel) and his two kids (Juliette Lewis and Ernest Liu) are driving in an RV on a family trip. They stop at a motel to rest which is the same motel that both Seth and Ritchie are staying at for the night. Seth and Ritchie decide that they are going to kidnap the family and make the father drive them into Mexico. Things get tense once at the border as the border patrol is checking every single vehicle for the Gecko brothers. They do end up crossing the border after a few issues at hand. Once they are in Mexico, they stop over to the Titty Twister, which is a strip bar out in no man’s land. The brothers cause all kinds of issues going into the bar, which aggravates the employees at the bar. They do not know that these employees are vampires thirsting for blood. All the humans in the bar must join together to stop a bloodbath from occurring once the vampires start attacking them.

The talent involved was phenomenal in this film and this goes from all the A-list to B-list stars involved. I didn’t even mention Cheech Marin, Tom Savini, Salma Hayek, Danny Trejo, and Fred Williamson as some of the actors involved in this film. Both Tarantino and Rodriguez pull off a classic film here with their screenwriting, directing, and acting. Then add the rest of the cast that really pulled their weight here and everyone were having a blast. This is one of those films that is steering you in one direction, and then all of a sudden hits you dead smack taking you in another direction.
Movie Content: 4.5/5 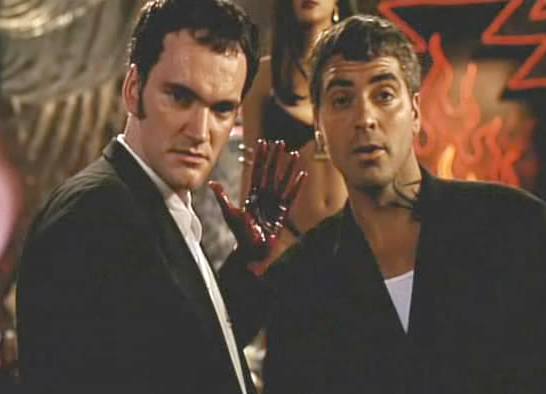 The print is presented in 1080p/AVC MPEG-4 with a 1.78:1 aspect ratio. I have owned both releases of this film on DVD and this transfer is fantastic making this worth an upgrade. Colors are bit more saturated over the DVD releases where colors were muted. In some scenes, colors are deep and others they are not. Black levels are deep and solid. Fleshtones are accurate and natural. Details are inconsistent with this print as in some spots they are off the charts and others there is a lack of detail. The final issue that I have with this print is that there is print damage apparent throughout the presentation with dirt and white specs. The white specs pop up a lot throughout the film which sometimes does get a tad bit annoying. Grain is also present, which at times is a little bit on the heavier side. While the video presentation is an upgrade over the previous two non-anamorphic DVD releases, this is a film that deserves better treatment in terms of video quality.
Video Quality: 3.5/5

The audio is presented in DTS-HD MA 5.1 mix. The audio is in better shape than the video, but this is also an area that will raise some eyebrows. This is a very aggressive mix that takes advantage of the soundfield when there is ongoing action. Sound effects pan from speaker to speaker giving that effect of bullets flying by. There are thundering booms with the gun shots and the vampires hissing/screaming as they show their fangs. This is one nice audio mix from a soundfield perspective. Dialogue is rather clean and clear through the center channel. There is a balance issue with the mix that is a mess. The difference between moving from a scene with dialogue to action is a huge difference. I felt at times like I was going to blow up the room with the shifting in sound not being appropriately mixed.
Audio Quality: 4/5

‘From Dusk Till Dawn’ is an excellent film by Robert Rodriguez and Quentin Tarantino which covers many different genres. The video and audio presentation of the Blu-ray is a mixed bag, even though both trump the previous DVD releases. I hope when this film is released here in the United States sometime in 2009 that these issues are alleviated. If Disney can please also add the extras in the U.S. release from the DVD Collector’s Edition, that would make many happy campers.
Overall Rating: 3/5 (Purchase if you are a fan)