The mystery of the universes deepens in the critically acclaimed 22-episode third season of television’s most exciting sci-fi. The Fringe team escapes from the parallel universe – except for Olivia, trapped in the other world and replaced in ours by her double, who turns Peter and Olivia’s tentative relationship into a love affair. Then Olivia returns, bonds of trust fray, ever more bizarre and terrifying phenomena occur and secrets that stretch back to 1985 threaten to destroy our universe. Or theirs. 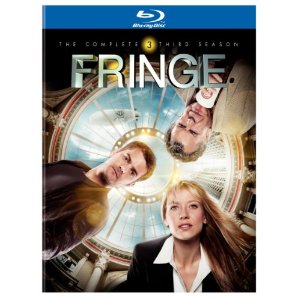 For its first two seasons, “Fringe” teased viewers with brief glimpses into an alternate universe that mirrors our own. In this third season, the curtain is pulled aside, seeing the universes interact with each other like never before.

Without giving away too many spoilers, the main plotline of season three focuses on deciphering the intentions of “Walternate”, “Faux-Livia”, and the mirror-Fringe department. Instead of characterizing that place as “evil”, this season gives it a more human feel, as Walternate (though undeniably evil) is just trying to save his world from the past crossing-over of “our” Walter many years ago. Roughly half the season is spent “over there”, with the other half focusing on the “real” Walter, Peter, and Olivia trying to figure out the doomsday device that will ultimately play such a large role in the future of both universes.

Also at the forefront of the emotional scene this season is the Peter/Olivia coupling. When both universes get a little “mixed up” in the early goings of the season, the budding relationship between the pair takes both a personal and cosmic twist of epic proportions.

Basically, this is just another mind-blowing seasons of the most well-written show on television right now. In typical JJ Abrams fashion, he blows our minds right away in the first episode, then explains it as the season progresses. There are so many emotional twists/turns that, when finished, you’ll feel as if more than just one TV season has flown by.

Though Abrams will always be best-known for “LOST”, he has carved out quite another niche with “Fringe”. Besides being a bit more procedural than “LOST”, “Fringe” is just as smartly written, well-acted, and filled with “OMG” moments in nearly every episode. I’m thrilled that FOX renewed the series for a fourth season, as the big finale of this third season sets up so many incredible, exciting possibilities.
Movie Quality: 9.5/10

If you haven’t watched Fringe yet, I recommend watching it from the very beginning. There has been a long, enjoyable and steady build-up from the first episodes of Season 1 to where we are now at the end of Season 3, and I promise you will enjoy the ride!
Overall Rating: 8/10