Friday the 13th – The Series: The 2nd Season DVD Review

Posted in DVD Reviews by George Theofanopoulos on 17 February 2009 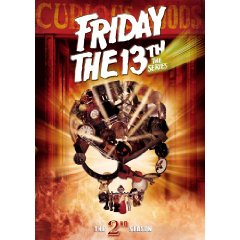 An antiques dealer named Lewis Vendredi (R.G. Armstrong) made a deal with the Devil to sell cursed antiques out of his shop, “Vendredi’s Antiques”, in exchange for wealth and immortality. He eventually grew tired of being the Devil’s puppet and broke the deal. The Devil came and claimed the soul of Vendredi (“Friday” in French) for breaking the deal. After Lewis’ death, his shop was inherited by his niece, Micki Foster (Louise Robey) and her cousin by marriage, Ryan Dallion (John D. LeMay).

They sold off many of the cursed antiques before being stopped by Jack Marshak (Chris Wiggins). The series follows the protagonists as they hunt down the cursed antiques, which are usually in the possession of people who have discovered their evil powers and are reluctant to give them up. Since the cursed antiques are completely indestructible, the ones that the group acquires are locked away in a vault beneath “Curious Goods,” the rechristened antique store. They use a special manifest written by Lewis as a guide as it holds the records of all the cursed objects sold.

The print is presented in 1.33:1 aspect ratio which is the same as the first season set. The quality of the show isn’t the greatest in the world as it varies throughout the entire set. The color palette looks rather soft and muted. The transfer looks rather clean, but the lack of not having an anamorphic enhancement takes away the television show looking at its best.
Print Quality: 2.5/5

The audio is presented in Dolby Digital 2.0 mix. The television series is mainly dialogue driven which comes through the center channel very clear. This is mainly a front heavy presentation with any sound effects coming through the right and left channels.
Audio Quality: 3/5

There are no special features which is a shame for a show like this that gets pretty good in the second season.

‘Friday the 13th: The Series Season 2’ is probably the best season in the series. It is rather disappointing that there are no special features and the video quality hasn’t received the proper treatment to match these days high definition quality televisions. For fans of the show I highly recommend picking up this series.
Overall Rating: 3.5/5