Posted in DVD Reviews by George Theofanopoulos on 23 January 2009 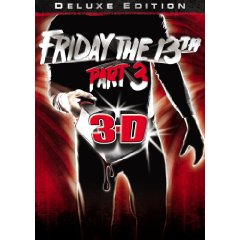 We are back with another ‘Friday The 13th’ review this week. The franchise that spawned off nine sequels, one spin-off title, television series, and a reboot film brings to us ‘Friday The 13th Part 3’ in 3-D. The previous DVD releases lacked 3-D which was an original feature of the film at the theaters. It was always a goal of mine to try and see this film in 3-D and that goal was achieved this past week. For this review I watched both the 3-D and regular versions of the film. This film came close to matching the originals box office total gross at $36 million dollars based off of $2.5 million dollar budget.

For those of us that saw the film over the years without having seen it in 3-D, there are a lot of awkward looking scenes. Many of the scenes had particular items like a post looking like its ready to poke out of the screen, a machete coming at you, lettering that looked as if it were popping off the screen, amongst many other scenes. These scenes have always been distracting while watching this film, but I have learned to ignore them over time.

The film begins with Chris (Dana Kimmell), going on a road trip with her friends to the family’s old home at Crystal Lake. Chris’s old flame Rick (Paul Kratka) is waiting for them at the cabin. The problem with Chris is that she was at Crystal Lake two years prior where she had an encounter with Jason. She managed to survive the attack, yet this has haunted her over the last two years. Going back to Camp Crystal Lake is a way for her to face her fears as this has haunted her every day since her encounter with Jason. There are a few other couples along for the ride, with one set being hippies, and they bring some comic relief. One of her friends, Shelly (Larry Zerner) is the reason why Jason dons the famous hockey mask.

Part 3 continues right after the events from the second film as Jason has just murdered a group of teenagers. The local police are going to the scene and they are passed by Chris and her friends. The killings begin one-by-one as Jason takes Chris’s friends in some very gruesome ways. The problem here is that some of the kills lack some punch since they are designed for 3-D if you are watching the standard edition. The best one is when Jason gets the hockey mask from Shelly and he uses a spear gun to kill one of the girls. Then add the biker gang in the mix that Shelly and his blind date have an encounter with at the convenience store. They come to the camp later in the film to extract revenge, but little do they know about the terror that waits for them in the barn.

While this third film in the franchise is not the worst, there are some apparent issues with the story and the direction of the film. This third entry is nowhere near as good as the first two films and the subsequent three films in the series. I have always found that the third, seventh, eighth, and tenth films in the series were the weakest of the sequels. While the tenth film had some high hopes by a planned trilogy, all that fell apart. The acting in Part 3 isn’t that great and has to be some of the worst in the series. It is campy horror, so I will still enjoy each ‘Friday The 13th’ for what it has to offer.
Movie Content: 3.5/5 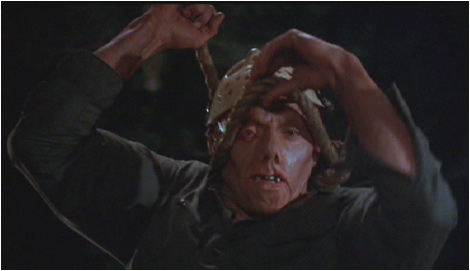 The print is presented in 1.85:1 aspect ratio with an anamorphic transfer. If this film has been remastered as is noted by Paramount and is part of the specs, it doesn’t look anywhere as good as the first two films do on DVD. That is a travesty as this one had a higher budget. I wonder if the 3-D has a lot to do with the image looking muddy. This issue is also apparent in the standard version of the film. There is quite a bit of grain throughout the presentation, heavier in some scenes and lighter in others.
Video Quality: 3/5

The audio is presented in Dolby Digital 5.1 mix. Like many of the older horror films of the 70’s and 80’s, ‘Friday the 13th’ relies on the score to build tension and atmosphere. The film’s soundtrack is more front heavy, but Paramount has done an excellent job in getting some usage out of the rears. This allows for that great score and the effects to be heard in the rears. Dialogue is clean and crisp through the center channel.
Audio Quality: 3.5/5

There are no special features available for Part 3, except the theatrical trailer.

‘Friday The 13th Part 3’ comes to DVD finally with its 3-D presentation intact. This will make longtime fans that have been waiting for this film in 3-D to view in their own homes. The picture quality is disappointing provide it that this film was to be remastered. The lack of special features is also disappointing in the same sense. For fans of the franchise, this is slightly better in terms of video and audio over the ‘Friday The 13th’ box set, but not by much.
Overall Rating: 3/5 (Purchase for fans, Rental for others)