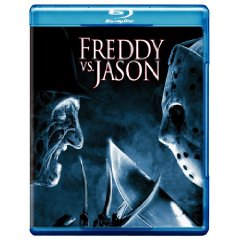 Since the 80’s, there was strong discussions between my friends as to who would win a fight between Freddy and Jason Vorhees. Then in the 1990’s those discussions became rumors in Hollywood that the two slasher icons would eventually meet. Once New Line Cinema purchased the rights to the ‘Friday the 13th’ franchise in 1993 releasing the ninth film, ‘Jason Goes to Hell’, the dream became a reality. With both ‘Nightmare on Elm Street’ and ‘Friday the 13th’ franchises under one umbrella, it allowed for the ultimate battle we have been waiting for.

The problem would be that the studio was having an internal struggle over the direction of the film. It took nearly ten years for ‘Freddy vs. Jason’ to be released in theaters in 2003 after the iconic scene in ‘Jason Goes to Hell’. ‘Freddy vs. Jason’ was very successful at the box office with a total worldwide gross of $114 million dollars and with a $25 million dollar budget. ‘Freddy vs. Jason’ revitalized both franchises, but there wouldn’t be any future installments of either film announced or rumored until 2008 when Michael Bay’s Platinum Dunes announced that on February 13, 2009 the remake of ‘Friday the 13th’ would be releasing in theaters.

The film opens with Freddy (Robert Englund) having been banished to hell as he tries to find a way out. He begins to search for another heartless, ruthless, killing machine like himself to get him out of this mess. Since Freddy is the master of the dream world, he brings Jason (Ken Kirzinger) back with a summoning from Jason’s mother. Once Jason awakens, he is tricked into going to Elm Street to do Freddy’s bidding so he can come back to terrorize the teens on the famous street that Freddy caused trouble so many years ago. It unknowingly turns into a competition between both Freddy and Jason as to who is going to kill the teens first. Freddy pulls each kid into his dream world one by one, but before he can use one of them to get back into the real world Jason kills them. Again, Jason does not know his purpose for being resurrected so he is killing each kid in sight and this is driving Freddy mad.

While Freddy is starting to lose it more and more that Jason is killing his victims one by one, we also have several teenagers that we spend a lot of time with as they are the backdrop to the story. Lori Campbell (Monica Keena) with her friends is partying at her parents home when Jason makes an appearance killing one of the girl’s boyfriends. This makes the kids start thinking that the old terror from Elm Street has returned, Freddy. In a Springwood mental institution, two boys that have been locked up along with other teens from the neighborhood, so the parents can cover up the Freddy Krueger murders. Both Will Rollins (Jason Ritter) and Mark Davis (Brandan Fletcher) decide to get out of the hospital so Will can get to Lori as he suspects something is wrong.

The teens quickly learn that there is something bigger here once they see a man walking around in a hockey mask. They begin to put two and two together realizing that there is some kind of Freddy and Jason alliance. It is good that the kids spend sometime talking about the history of both Jason and Freddy for newer viewers. We also learn that most of the teens were put into the hospital so they don’t mistakenly bring Freddy back through their dreams. As the teens plan to stop Freddy and find out how they will stop Jason, Freddy escapes hell where he is banished in and pulls Jason back in. As Freddy continues to try and kill Jason now that he has the power, the teens try to save Jason by taking him to Crystal Lake. While this is occurring, Lori takes some sleeping pills so she can pull Freddy out of the dream world and into the real world for one final battle between both horror icons.

I didn’t understand all of the negative reviews towards this film as it was a very entertaining film. The story could have been better in many spots. Several complaints had to do that Freddy should have battled Jason from the onset of the film, but what fun would that have been to see 90 minutes of two guys fighting each other that can’t die. Building up to the final act with the teens involvement I feel was a great decision which would lead to the ultimate battle at the end of the film. While the battle at the end did feel a tad bit hokey in some places, it was good to see the two horror icons do battle with each other. We also get some good one-liners from Freddy as he is famous for and same could be said from some of the teens saying some comical one-liners.
Movie Quality: 8.5/10

The print is presented in 1080p/VC-1 with a 2.40:1 aspect ratio. I found this U.S. release of ‘Freddy vs. Jason’ to be a bit better looking than the Alliance release. With this being the third time owning this film on a digital format, it is also the best release so far. Colors are deep and well saturated throughout the entire presentation. Blacks are strong and almost inky at times. Nowhere did the image ever appear soft with such strong colors and black levels. Flesh tones were also natural. There is some subtle grain in a few scenes, but never a distraction. Blue tints look very strong as this color is used in several scenes, especially when the teens are sitting in the back of the van.
Video Quality: 9.5/10

The audio is presented in DTS-HD MA lossless 7.1 mix. This is a definite upgrade over the Alliance release as the audio mix was mixed just right. With my review of the Alliance release, I had an issue where I had to turn up the volume on my receiver to around 51 when it is usually at 45 for DTS-HD tracks in other films. With the U.S. release I did not have this issue at all. This is a very aggressive mix with the soundfield being in use at all times. The surrounds get all kinds of action from sound effects, the soundtrack, action scenes, voices, and the score brings this film to life. Dialogue is clean and crisp with no real issues. This mix is well balanced between the effects and dialogue.
Audio Quality: 9.5/10

I was excited to see that with the U.S. release we received all the extras that were missing from the Alliance release. Warner at times is hit or miss with their feature sets on catalog titles, but here they finally decide to give us everything that was also on the U.S. DVD release from several years ago.

The battle that we all were waiting for finally arrived in 2003 and in high definition Blu-ray in 2009. If you are a fan of the ‘Freddy vs. Jason’, I highly recommend picking up this release as it is the complete set on high definition. With superb video quality and audio that is an upgrade over the DVD, fans should look into this release. If you own the previous Alliance release, time to get rid of that one and buy the U.S. release as the features alone are worth the upgrade.
Overall Rating: 9/10