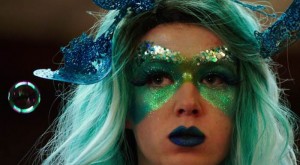 Billy Bloom (Alex Lawther, The Imitation Game, The End of the F***ing World) is one-of-a-kind: a fabulous, glitter-bedecked, gender-bending teenager whose razor-sharp wit is matched only his by his outrageous, anything-goes fashion sense. When his glamorous mother (Bette Midler, Ruthless People) is forced to send him to live with his straight-laced father (Larry Pine, The Royal Tenenbaums), Billy finds himself a diva-out-of-water at his new ultra-conservative high school. Undaunted by the bullies who don’t understand him, the fearless Billy sets out to make a big statement in his own inimitable way: challenging the school’s reigning mean girl (Abigail Breslin, Little Miss Sunshine) for the title of homecoming queen. This proudly offbeat comedy is an irresistible ode to outsiders and nonconformists of all stripes. 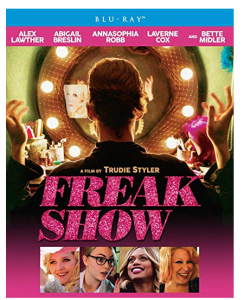 Trudie Styler’s first feature film is about staying loyal to yourself and what you stand for despite being bullied and physically assaulted. At the start of the movie Billy Bloom (Alex Lawther) does come across as being a little too fabulous in his behavior and appearance. I can see why that would be off-putting to many people. And possibly that was the point. We judge others based on first impressions which are almost always superficial because we don’t have anything more to consider.

Billy’s parents are separated and each show only a shallow, mostly hands-off interest in their son. Florence, the housekeeper, is passively sympathetic and protective, but unable to be meaningfully supportive. Billy is essentially alone and coping with his confused sense of self by being as provocatively freakish as he can be.

When Billy starts at a new school, he deliberately alienates himself from the other students by letting his “freak flag fly” in the most flamboyant way imaginable. He is understandably the target of bullying both trivial and physical. Then, for reasons not easily understood, he attracts the friendship of one of the school’s most popular, decidedly straight, male students, Flip Kelly ( Ian Nelson). Flip becomes the catalyst that helps Billy tone down his provocative, defiant and flamboyant behavior because he is possibly the first person in Billy’s life who appears to care for the person beneath all the make-up and glitter.

The print is presented in 1080p/AVC MPEG-4 with a 2.38:1 aspect ratio. Shout Factory does a great job bringing this film into the world of high definition. The biggest strong point in the entire print is that colors looking natural on Blu-ray. With outdoor and indoor scenes, color is vibrant and bold in this transfer. Details are strong throughout which with the colorful aspects of the film give it a very strong picture. I will say that I was not disappointed by the picture quality.
Print Quality: 9/10

The audio is presented in a DTS-HD MA lossless 5.1 mix. ‘Freak Show’ is a mix between dialogue and some strong musical parts sprinkled throughout but when the soundtrack comes into play it does add to the atmosphere of the film. There really wasn’t anything that stood out, audio-wise the surround channels do a pretty good job in filling the soundfield. If anything, it’s all about the dialogue and the dialogue on the lossless soundtrack is crystal clear. I detected no hiss or any audio problems while watching the film.
Print Quality: 9/10

A film about standing ground in the face of adversity, being true to one’s self at all costs, Freak Show was the perfect way to end a film festival about the diverse and the changing landscape of the LGBT community.
Overall Rating: 8/10