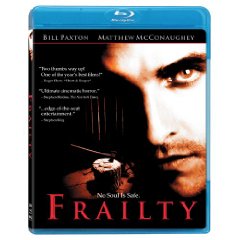 Steeped in gloomy atmosphere, Frailty locates its horror in the tyranny of religious fanaticism. Making an assured directorial debut, actor Bill Paxton costars as a Texas widower who believes God has recruited him to destroy demons in human form. Feeling divinely justified in committing a series of ax murders (discreetly unseen), he urges his two young sons to assist him in the killings–a living nightmare recalled in flashback by one of the now-adult sons (Matthew McConaughey) to the FBI agent (Powers Boothe) who’s investigating the murders. But mystery is of secondary importance in Brent Hanley’s cleverly twisting screenplay; Frailty suggests, with unsettling subtlety, that Paxton’s mission may not be delusional, thus burdening his deadly wrath with spiritually disturbing significance. It’s definitely not a feel-good film, but with celebrity endorsements by Stephen King and directors James Cameron and Sam Raimi (who both made films with Paxton), Frailty gets under the skin with insidious efficiency.

This is a movie that does not need a plot twist. The premise is intriguing: a father believed that he received a mission from God to destroy the demons who walked on Earth in the guise of humans. As he made his children his accomplices in his horrifying acts, the elder son realized in horror that his father was going mad. Since he loved his father dearly, the son struggled to find ways to escape the nightmare. As the son became rebellious, an angel told the father a terrible secret.

Had the movie been developed more along this story line, I believe that it would have the potential of being a classic horror movie. However, as Hollywood is still in love with plot twists, the movie decided on a predictable, and very banal plot twist that basically stripped away the story’s humanity. While the twist could still serve as a subject for debate, it left little room for ambiguity, and no room for the movie’s actors to deliver their acting chops. I’m sure McConaughey would have loved to flex his acting talent on showing the adult Fenton’s struggles with the memory of his demonic act when he was the boy.

‘Frailty’ is not your typical serial killer movie in that it remains low-keyed and understated throughout. Paxton has created a work that is genuinely creepy, chilling and disturbing, yet I was not overly excited with the pacing or ending of the film.
Movie Quality: 6/10

The print is presented in 1080p/AVC MPEG-4 with a 1.85:1 aspect ratio. ‘Fraility’ is not going to win any awards with its transfer to high definition on Blu-ray. Colors are dull and washed out looking throughout the print, especially with the flashbacks. The colors in the film help set the tone and mood giving this that much needed atmosphere. Blacks are deep. There is no apparent print damage. There is some edge enhancement throughout the print. I did not find details to be that good as they were above average. There were some scenes with some good details, while others were lacking.
Video Quality: 6/10

The audio is presented in DTS-HD MA lossless 5.1 mix. ‘Frailty’ is a more dialogue driven film with decent audio for the premise of the film. Dialogue is very clean and crisp through the center channel. We have more of a front heavy experience with the mix as dialogue also tends to pan between the front speakers. When the rears get are in use, you hear a few sound effects and the score.
Audio Quality: 7/10

‘Frailty’ was not my kind of horror film due to the slow pace and a twist ending which in many ways ruins what we built up to. I wasn’t amazed by the video and audio presentation considering that Lionsgate has done an excellent job of late with catalog releases. I would rent this first as the movie may not appeal to all.
Overall Rating: 7/10