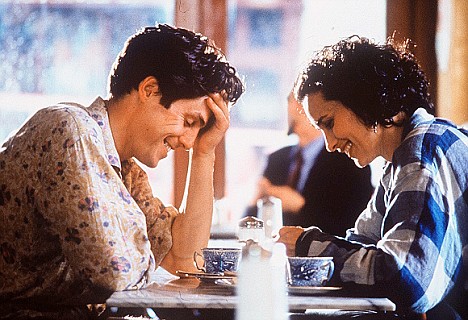 A surprise hit and one of the highest grossing films ever to come out of Great Britain, this effortlessly enchanting romantic comedy finds confirmed bachelor Hugh Grant (Nine Months) attending weddings with his single friends as they all lament not being able to commit. Grant keeps running into an attractive American (Andie MacDowell) at these festivities and begins a long-running affair with her, even as he attends her own wedding, the funeral of one of his best friends, and his own pending nuptials. Featuring a spirited supporting cast including Kristin Scott Thomas (The English Patient) as the acerbic friend quietly in love with Grant, this touching and funny film with a mischievous sense of humor and some truly heartbreaking moments is destined to become one of the classic romantic comedies of all time. 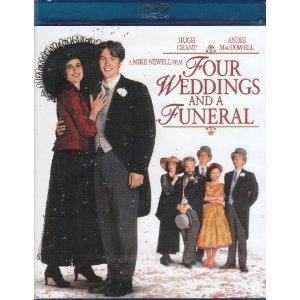 The film is littered with wonderfully full performances, especially by Hugh Grant and Kristen Scott Thomas, but no one can really be singled out as worst-in-show since everyone involved rises to the occasion and hands the audience a wonderful experience. Grant though, should be singled out as best-in-show for he really personifies what he has been trying to personify since he first appeared on the big screen. Some actors are always given a hard time for constantly playing variations of the same character. Some do so wonderfully, others not so wonderfully. Grant has made a career of, rather wonderfully, playing the commitment phoebe that unintentionally pushes everyone away with his arrogance. Charles is the perfect example of this character because Grant has softened him to the point where his arrogance is an understatement and his gentle nature is his major selling point. I am still baffled at the fact that Grant has yet to receive an Academy Award nomination, for he is constantly effortless in his roles and typically stands out in every film he inhabits as `best-in-show’. Kristen Scott Thomas is also edible as Fiona, capturing the comedy within the script effortlessly, and inhabiting her character with real warmth and genuine heart. Her secret desires for Charles help create a three dimensional character who is both easy to love and easy to understand.

It must be said that Richard Curtis knows how to pen a winning comedy. His style of wit and poignancy help elevate `Four Weddings and a Funeral’ from a generic romantic comedy to something much deeper and ultimately much more memorable. He has a knack for giving his characters something to sink their teeth into, something to really embellish and deliver to the audience. He creates characters that we can feel connected to, and we truly feel connected to the ones presented us in ‘Four Weddings’.

In the end `Four Weddings and a Funeral’ is a feel good romantic comedy that hits almost every mark and delivers a beautifully fulfilling cinematic experience. It has its faults, sure, and it misses the mark in some areas, but not every film is aimed at perfection. What every film is aimed at though is entertainment, and `Four Weddings and a Funeral’ definitely entertains.

The print is presented in 1080p/AVC MPEG-4 with a 1:85:1 aspect ratio. The result is a clear upgrade, as you would expect, but it’s not a stellar transfer by any means. The movie is plagued with minor scratches and dirt throughout the 118 minutes. The image is soft at times and clarity never threatens to dazzle the viewer. Colors are accurate, but a little subdued. I briefly considered a 3/5 rating, but I think most of the presentation deserves the extra half point. Fans of the movie should buy it, but temper expectations.
Print Quality: 8.5/10

The audio is presented in a DTS-HD Master Audio 5.1 mix. The DTS-HD Master Audio 5.1 is more than adequate, but this isn’t the kind of movie that makes full use of sound. It consists of dialogue-driven scenes for the most part, although the surrounds do add depth in the wedding reception scenes. I thought I detected minor sync issues in a couple of places, but they were brief.
Print Quality: 8/10

In summary, Four Weddings is a great movie. The humor is quirky, though, and probably not for everyone. For anyone willing to take a chance on something different, however, this is a true keeper. It was an instant classic when it was released and remains one to this day.
Overall Rating: 7/10