A ringing instance of a sequel far outstripping its predecessor, Sergio Leone’s For a Few Dollars More takes the lethal antihero from A Fistful of Dollars, gives him both a rival and an adversary worthy of sharing a gun-blazing corrida, and ratchets up the stylization to something approaching grandeur. This time the Man with No Name (Clint Eastwood) is a bounty hunter whose desert Southwest killing ground is suddenly crowded by the presence of an older, black-clad shootist (Lee Van Cleef). Individually and together, they terminate sundry grotesques while closing in on their biggest quarry, a memorably insane bandit called El Indio (Gian Maria Volonté is brilliant). There’s just enough plot to imbue Van Cleef with genuine mystery, a dark avenging angel from a lost past whose pull would supply the emotional core of Leone’s later masterworks Once upon a Time in the West and Once upon a Time in America. 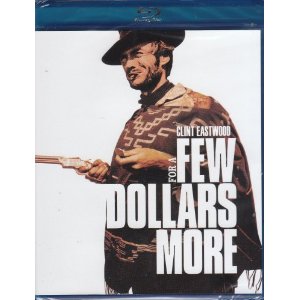 Sergio Leone’s “A Fistful of Dollars” introduced Clint Eastwood’s “Man With No Name” series and introduced the world to the Spaghetti Western, but the next film is more enjoyable than that first one.

In this film Clint plays Monco, a bounty hunter. (The Man with no Name again has a name…) In an early scene we see that Monco is a fearless sharp-shooter, bringing in a bad guy for a reward that is three times the yearly salary of the receiving Sheriff. We’re also introduced to another sharp-shooting tough guy bounty hunter – Colonel Douglas Mortimer – played by Lee Van Cleef. Van Cleef plays a little against type as in earlier films he was usually the heavy. Here he takes that bad-guy personna and plays a dude who can wade into a roomful of baddies and walk out with his man without flinching.

After establishing the two bounty hunters as good at their job we’re introduced to Indio, played by Gian Maria Volonte (even scarier than from the first movie). Indio is broken out of prison in a bloody rescue, then has a bounty on his head equal to a lifetime’s salary. He’s particularly evil – not content to merely murder and kill, he toys with his victims before cruelly murdering them.

At first Monco and Mortimer are disappointed to be after the same prey, but the Colonel proposes a partnership – after all, the 14 baddies in Indio’s gang would be tough for even the two bad bounty hunters.

This film perpetuates several of the iconic western archetypes that Eastwood later leveled in “Unforgiven”, but it’s bloody western fun. Eastwood was taking notes. And, recently watching the film again, I find that Van Cleef more than holds his own with the rising superstar.
Movie Quality: 9.5/10

The print is presented in 1080p/AVC MPEG-4 with a 2:35:1 aspect ratio. ‘For A Few Dollars More’ fairs much better than it’s predecessor on Blu-ray. Colors are less soft, providing a bit stronger appearance. Black levels are pretty good and stay consistent. Clarity is decent with details being a huge improvement over the DVD release. There is some grain which is consistent. The dirt and white specs issues which were a problem in ‘A Fistful of Dollars’ seems to have been greatly reduced to a minimum. For the age of the film almost approaching its 50th anniversary, this looks the best it has on home video.
Print Quality: 8.5/10

The audio is presented in a DTS-HD Master Audio 5.1 mix. This mix is good for being DTS-HD MA 5.1 providing good separation throughout all the channels in the soundfield. This film is still a very front heavy experience due to the nature of the sound design. It benefits from a 5.1 mix with effects and sounds from the horses, bullets, etc. coming through the surrounds. Dialogue comes through the center channel very clear and crisp.
Print Quality: 8/10

The addition of Lee Van Cleef makes “Few Dollars More” superior to its predecessor. Here, Lee and Clint are bounty hunters in competition for the same fugitives. They join forces to try and capture the notorious El Indio (Volontè) and his outlaw bunch.
Overall Rating: 8.5/10