Flight of the Intruder Blu-ray Review 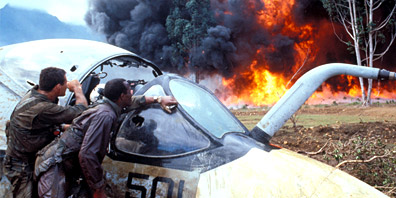 Time has been kind to Flight of the Intruder, a rousing aviation-action adventure that looks better now than it did to critics who panned it in 1991. Perhaps they were expecting a Tom Clancy-ish blockbuster (producer Mace Neufeld oversaw the Jack Ryan franchise), but director John (Conan the Barbarian) Milius had something potentially more substantial in mind. The first 75 minutes are pure Milius: Macho bluster, male bonding among ill-fated pilots and Naval bombardiers, and a Big Wednesday-like passion for dangerous fun. But Milius’s favorite topics have sharper teeth here: He’s made a scathing anti-Vietnam film that still honors the bravery of soldiers who do their job even when the job itself seems pointless. That’s why ace Brad Johnson (why didn’t he become a huge star?) and maverick bombardier Willem Dafoe plot a renegade mission, bombing a Hanoi arms depot with their low-altitude A-6 Intruder in the movie’s pyrotechnical climax. Fringe benefits abound, including early roles for Tom Sizemore, Ving Rhames, and David Schwimmer in his big-screen debut, three years before Friends and looking like the dweeby grandchild of his Band of Brothers martinet. 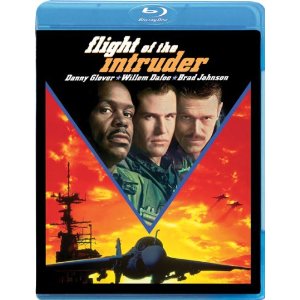 During the Vietnam war, A-6 Intruder aircraft were used to bomb targets in North Vietnam. Unfortunately, many of these targets had little or no military value, and the only destruction caused by these raids was to trees or staging areas. No large targets were hit. However, many American crewmen were killed during these missions. This movie tells the story of the A-6 and how one crew took matters into their own hands.

Brad Johnson stars as Jake Grafton, a brash Intruder pilot. He and his bombardier are on a mission against enemy targets. Jake drops his bombs and heads for home. The target is destroyed, but Jake’s bombardier was mortally wounded. Back on his ship, Jake learns that his bombardier has died and all he succeeded in hitting was a group of trees. Commander Frank Camparelli (Danny Glover), the squadron commander, tries to calm Jake down, but to little avail.

Meanwhile, Virgil Cole (Willem Dafoe) has joined the squadron as Jake’s new bombardier. After serving three tours, Cole has become cynical of the war, but he still loves to fight. Soon, Jake, Cole, and other members of the squadron are sent off on another raid. Once again, the results are the same; another worthless target destroyed and more crewmen killed. Jake and Cole have become incensed at these missions and they have decided to take matters into their own hands.

Jake and Cole decide to fly a mission into Hanoi to destroy a SAM base. Although the mission is a success, Jake and Cole now face court-martial charges. Will they be convicted, or will they somehow beat the charges and remain in the Navy?

This is a top-notch movie. It does a good job of showcasing the A-6 Intruder. This aircraft carried no defensive armament, yet it served as the Navy’s primary carrier-based bomber for much of the Vietnam War. Brad Johnson and Willem Dafoe are very good in their roles. Danny Glover is excellent as Commander Camparelli. The combat scenes and air battles are exciting to watch as well.

The print is presented in 1080p/MPEG-4 with a 2.35:1 aspect ratio. The print does not hold up well after all these years especially with this transfer to Blu-ray. Colors are washed out and look rather muddy. It does not help at all that black levels are not strong and then very inconsistent. There is grain throughout the film with added noise in the background. To say the least, I was rather disappointed with this transfer.
Video Quality: 7/10

The audio is presented in DTS-HD MA lossless 5.1 mix. ‘Flight of the Intruder’ offers a very aggressive sound mix that is bombastic. This is a very aggressive mix with the soundfield being in use at all times. The surrounds get all kinds of action from sound effects, the soundtrack, action scenes, and voices brings this film to life. Dialogue is clean and crisp with no real issues. This mix is well balanced between the effects and dialogue.
Audio Quality: 9/10

I highly recommend this movie. The action is non-stop and thrilling to watch. Watch and see how two bomber crewmen take matter into their own hands and deal a lethal blow to the enemy.
Overall Rating: 7/10