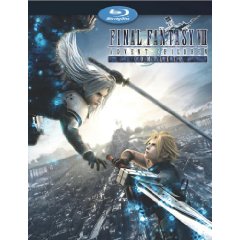 The question facing any viewer of the Japanese CG feature Final Fantasy VII: Advent Children is: do you have to know the games on which it’s based in order to understand the film? And the answer is: it certainly helps. But even complete novices (i.e., most parents) in the Final Fantasy world will find some entertainment in its wealth of fantasy-based action, and the animation never fails to astonish. Picking up two years after an epic battle between the forces of good (represented by brooding soldier Cloud) and evil (Cloud’s former general, Sephiroth), FFVII opens in the devastated city of Midgard, whose youthful occupants suffer from a ghastly disease known as Geostigma. A trio of brothers arrives with what appears to be a cure for the plague, but their gesture conceals a more sinister purpose: to revive Sephiroth and bring about the end of the world. Cloud and his companions must once again rise to the occasion to stop the siblings and the revived Sephiroth from unleashing total destruction. Complex and self-referential to the point of occasional incomprehension, Final Fantasy VII will definitely be most appreciated by fans of the game series, but if others can look past the numbing dialogue and frenetic action (which is a bit too intense for very young children), the film offers a carefree and action-packed viewing experience. The two-disc set contains the original Japanese language version of the film as well as an English-dubbed edition (Rachel Leigh Cook and Christy Carlson Romano, among others, provide the vocal talent) and a version edited for the Venice Film Festival. A 30-minute featurette that recaps the Final Fantasy story up to VII, as well as a making-of documentary, deleted scenes, and promotions for future Final Fantasy VII games and products round out the extras.

Final Fantasy 7:Advent Children looks very good. Better than The Spirits Within, and that’s saying something. It’s got action, vast cityscapes, and people with hair that moves. And it’s got monsters and motorbikes, and more action…and yet more action. In fact, there’s so much action everything else falls by the wayside, and here lies one of the films biggest failings.

First, it has to be said that if you haven’t seen Final Fantasy 7 and know a far bit about the world that this adventure takes place in, you’re going to be totally lost here, because the movie is a direct sequel to that video game. So, as far as the movie going public goes, that’s got to be a pretty small audience, even for a game like this, which was a massive world seller. But that’s still not going to get as many bums on seats as your usual futuristic blockbuster. Still, let’s assume that you’re a bit of an FF fan and you’ve taken your chances and sat down, looking forward to seeing all your favourite characters come to life, so lets see what you get.

If you loved FF7 and care about the characters you will like this film. Casual fans of action movies might not appreciate this as much as the die hard constituency of FF fans.
Movie Content: 8/10

The print is presented in 1080p/AVC MPEG-4 with a 2.35:1 aspect ratio. This has to be one of the most vivid and colorful animations on Blu-ray. Due to the colors popping off of the screen, it brings out the details in the animation. Some good examples of fine details, look at Cloud’s hair, you can see individual strands of hair.  This has to be one of the cleanest and most pristine animated films that I have seen even 4 years later.

The audio is presented in DTS-HD MA lossless 5.1 mix. The audio takes advantage of the soundfield with the rears getting a good amount of usage. Special effects such as guns blazing sound very good. Dialogue is clean and clear through the center channel. This is a well balanced mix with no issues of having to raise or lower the volume.
Audio Quality: 9/10

One of the complaints I’ve heard is the lack of a cohesive plot. I never felt lost and I can’t think of one animated movie I’ve ever seen expecting a compelling and complex plotline. What I do hope for is to see a flick that is mindless entertainment. That is where “Advent Children” more then succeeds.
Overall Rating: 9/10