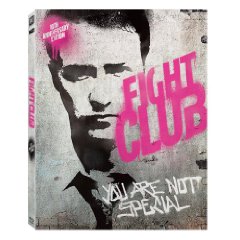 All films take a certain suspension of disbelief. Fight Club takes perhaps more than others, but if you’re willing to let yourself get caught up in the anarchy, this film, based on the novel by Chuck Palahniuk, is a modern-day morality play warning of the decay of society. Edward Norton is the unnamed protagonist, a man going through life on cruise control, feeling nothing. To fill his hours, he begins attending support groups and 12-step meetings. True, he isn’t actually afflicted with the problems, but he finds solace in the groups. This is destroyed, however, when he meets Marla (Helena Bonham Carter), also faking her way through groups. Spiraling back into insomnia, Norton finds his life is changed once again, by a chance encounter with Tyler Durden (Brad Pitt), whose forthright style and no-nonsense way of taking what he wants appeal to our narrator. Tyler and the protagonist find a new way to feel release: they fight. They fight each other, and then as others are attracted to their ways, they fight the men who come to join their newly formed Fight Club. Marla begins a destructive affair with Tyler, and things fly out of control, as Fight Club grows into a nationwide fascist group that escapes the protagonist’s control.

What is the role of a man in modern society? What happens when a man searching for some relevance loses his way and goes down the wrong path, and I mean the really wrong path? What emotions will society allow a man to express and under what conditions? If man can’t show external signs of emotional pain, what leads him to crave physical pain? Where are the valid models of masculinity and manhood in our stereotypical consumerism society? Why do men struggle for independence while simultaneously longing to join the pack? How do men redirect or repress anger so they can function in society? How does modern man cope with the loss of the aggressive, primitive, warrior masculine archetype that haunts our genes? All of these issues are explored in Fight Club. Despite the violence, this satire and social commentary is highly entertaining.

Ed Norton is superb as a young man trying to make sense of his world by maintaining a 9 to 5 job, traveling for work to non-descript towns, restaurants, and hotels, buying a condo and furnishing the condo in a manner that shows he knows what is hip. He grows increasingly hostile to his supervisor and his job. Numb to this world and finding that he has no real meaning in life or outlet for his emotions or feelings of connection, he begins joining 12 step programs and disease/survivor support groups.

He joins the testicular cancer support group where men mourn the loss of their testicles and cry in each other’s arms. Thus, in a prescribed time and place and condition, men may cry. They can cry over the loss of their manhood, their virility, and their fertility. But these men are mocked in the film for they choose to cry instead of howling. They show emotional pain rather than crave physical pain as the release of their internal pain.

Our narrator meets a young odd woman who craves human connection by attending endless 12 step and support group meetings, just like the narrator. Helen Bonham-Carter plays this role extremely well. So well does she take on this character that this may be one of her strongest performances on film. Wouldn’t you think that two young people who crave human contact and genuine emotion so much that they attend endless meetings would find each other? Of course they can’t for they don’t even know what ails them. They even arrange to attend alternating meetings so that they don’t run into each other. Why? Because they may experience genuine emotion should they open themselves to each other.
Movie Quality: 9.5/10

The print is presented in 1080p/AVC MPEG-4 with a 2.40:1 aspect ratio. If you are coming in hoping for a film that looks sharp, clean, and demo material look elsewhere. This was not the director’s intentions back in 1999, and I can gladly say that the true grim and grit of the film is kept in tact here with this Blu-ray release. While the film did have a bunch of issues on DVD such as color timing issues, lack of clarity, and heavy noise a lot of these issues have been fixed here with this Blu-ray release. ‘Fight Club’ keeps that very film like look throughout even in high definition, but a lot of these issues were cleaned up to give this image much more depth than ever before. Colors are much deeper and stand out in the dark backgrounds. Black levels are strong considering that there are a lot of darker scenes. Details are sharper than before showing an improvement in clarity. This is a definite upgrade on Blu-ray and I would suggest that if you own the previous DVD releases, toss those out and grab this one on Blu-ray.
Video Quality: 9.5/10

The audio is presented in DTS-HD MA lossless 5.1 mix. This has to be some of the best sounding audio mix for a catalog title on Blu-ray. If you thought that the video was an improvement, the audio will knock your socks off. The audio is demo worthy and is a disc you want to pull out when your friends our over to show them how much better Blu-ray is over DVD, and also considering that this is a catalog title is an added bonus. What is impressive here is that there is always effects going on in the soundfield, albeit it being discreet sounds through the rears or dynamic effects that immerse the viewer. The soundtrack is booming with the Electronic mix throughout the entire film. Dialogue is clean through the center channel with no apparent issues.
Audio Quality: 10/10

I find ‘Fight Club’ to be a very underrated film that is love/hate amongst viewers due to its gruesome and brutal nature. This film on Blu-ray excels at every turn with excellent video and demo worthy audio presentation. The special features have been ported from the 2-disc DVD along with a few new ones. If you own the film on DVD as a Blu-ray owner, get rid of that disc and upgrade to the Blu-ray.
Overall Rating: 9/10