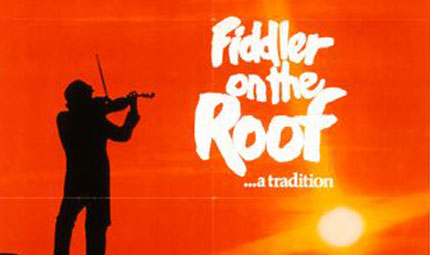 This rousing musical, based on the stories of Shalom Aleichem, takes place in pre-revolutionary Russia and centers on the life of Tevye (Topol), a milkman who is trying to keep his family’s traditions in place while marrying off his three older daughters. Yet, times are changing and the daughters want to make their own matches, breaking free of many of the constricting customs required of them by Judaism. In the background of these events, Russia is on the brink of revolution and Jews are feeling increasingly unwelcome in their villages. Tevye–who expresses his desire for sameness in the opening number, “Tradition”–is trying to keep everyone, and everything, together. The movie is strongly allegorical–Tevye represents the common man–but it does it dexterously, and the resulting film is a stunning work of art. The music is excellent (it won Oscars for the scoring and the sound), with plenty of familiar songs such as “Sunrise, Sunset” and “If I Were a Rich Man,” which you’ll be humming long after the movie is over. Isaac Stern’s violin–he provides the music for the fiddler on the roof–is hauntingly beautiful. And despite the serious subject matter, the film is quite comedic in parts; it also well deserves the Oscar it won for cinematography. 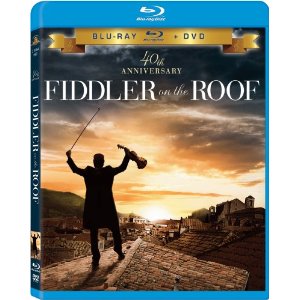 Milkman Tevye (Topol), his wife, and five (!) daughters in pre-revolutionary Russia. I remember my parents going to see this at the theater, probably back in 1971, when it was released, and listening to my mom and some of her friends swooning over Topol. I have to say, I can see their point. It’s not the appearance, it’s the character.

One by one, his older daughters buck tradition and choose their own husbands by falling in love: a penniless tailor, a revolutionary teacher, and a local, non-Jewish Russian boy. And despite his bluster at not being obeyed as the head of the household, one by one they twist him around their little fingers. (The last one almost doesn’t succeed.) One of the sweetest moments in the movie comes when all this romance gets to Tevye and he asks his wife of many years if she loves him.

It’s a wonderfully emotional snapshot of the setting–the time and the place, but it’s not just historical drama. It’s about the struggle to find, accept, and hold on to one’s roles in the family and in society, something everyone can relate to.

The historical parts–the anti-Semitism that forced these people from their homes–were hard to watch, but important, especially if the thinking they provoke extends beyond the specific people, time, and place. The lesson is all the more powerful for being surrounded by warmth and humor.
Movie Quality: 9.5/10

The print is presented in 1080p/AVC MPEG-4 with a 2:35:1 aspect ratio. The print looks very good throughout with a bit of a softer look to the print. Colors are excellent in helping bring out the fine details. The detailed scenes stand out very well. Blacks are deep. For a film of this age, MGM has done a wonderful job bringing ‘Fiddler on the Roof’ to high definition. The details alone stand out very well just giving this film a surreal look. There is minimal grain which looks very even. All this really comes together well giving this 40 year old film a very natural look that will not disappoint long time fans.
Print Quality: 9.5/10

The audio is presented in a DTS-HD MA lossless 7.1 mix. The Bock-Harnick score has never sounded so good and with this lossless audio mix it brings the experience to life. This is an audio mix that is dialogue driven, but takes well advantage of the surrounds in the soundfield with the soundtrack. I was astonished at how beautifully the songs from the soundtrack came pouring into the soundfield. The dialogue is clean and clear through the center channel with no apparent issues. I was very impressed considering the age of the film how great this sounded.
Print Quality: 9.5/10

The music in this movie is absolutely beautiful. You’ll tap your feet to “If I Were a Rich Man,” and “Miracle of Miracles.” You’ll find tears in your eyes during “Sunrise, Sunset,” and “Far From the Home I Love.” You’ll laugh at Yente and during the dance at the bar. A marvel, this film has never looked or sounded better for home viewing – a remixed DTS-HD MA lossless 7.1 soundtrack and crystal-clear picture on Blu-ray make this a contribution to your film library you’ll not regret.
Overall Rating: 9/10