Posted in DVD Reviews by George Theofanopoulos on 18 February 2009 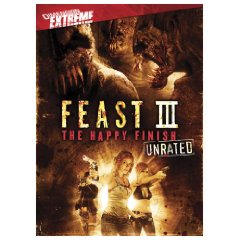 The original ‘Feast’ has to be one of those horror movies in the same vein as say a ‘Critters’ with a mix of ‘From Dusk Till Dawn’. When I originally reviewed the HD DVD, this is one of those films that has something unique about it even though it is so ever simple. I am a huge fan of the original ‘Feast’ which had a small budget that did big things with what they had to work with. ‘Feast’ had that special feel to it like genre giants ‘Texas Chainsaw Massacre’, ‘Evil Dead’, and ‘Phantasm’ of their era. The original ‘Feast’ was written by Patrick Melton and Marcus Dunstan, directed by John Gulager. All three brought ambition and drive to the original film making it a successful release on the home video front. ‘Feast’ was released in theaters for a limited run only making $56,000 at the box office, but once the film hit DVD it has brought in $3.2 million dollars.

Then ‘Feast II: Sloppy Seconds’ would be released last fall with a few returning characters and continuation where the first one left off from. In ‘Feast III: The Happy Finish’ one we catch up with the survivors of the second film back on the streets of the little town. It is funny to the characters we are introduced to join the survivors with names like Jean-Claude Seagal. It is some of the goofy names like Jean-Claude Seagal that we know this series does not take itself seriously. In a way this is good as it sets itself apart from other horror films, but in another aspect it hurts it a bit since this series could have been so much more kick ass.

As the survivors begin to come out of hiding and go on foot in the town, they begin to meet the baddies one-by-one. These beasts or mutant creatures are unforgiving and rabid. They tear their victims from limb to limb. There was even one that raped one of the survivors where he gave instant birth creating a mutant hybrid. From beginning to end, this is a film about a group of people having to put their differences aside so they can live.

The gore is taken up to another notch in ‘Feast III’ and you will not have a moments rest from some kind of blood or bodily fluid flying across your screen. If you are the kind that is squeamish, this may not be the film for you. There are scenes that will make you want to puke your guts out they are so disgusting. Just make sure you are not eating or drinking anything while watching this film.
Movie Content: 3.5/5 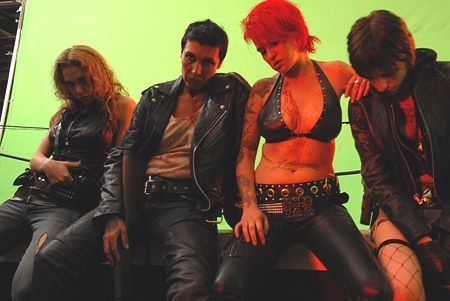 The print is presented in a 1.85:1 aspect ratio. The film has a little bit more grittier feel to it than the original ‘Feast’, but the image is much cleaner and looks rather sharp. There is also softer color palette with lighter colors like yellow’s popping much more on the screen. With ‘Feast III’ having a larger budget, it helps with the overall production values bring this film to life.
Print Quality: 4/5

The audio is presented in a English Dolby Digital 5.1 mix, which is a very active soundtrack due to all the action sequences and the creatures running rampant terrorizing our heroes. You can hear hissing and different sound effects from the creatures. The dialogue came through the center channel very clean with no issues at all.
Audio Quality: 4/5 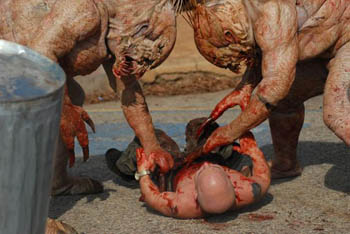 ‘Feast III: Happy Trails’ is the final film in the trilogy as it does a great job continuing the same type of film as the first two. This goes to prove that the Dimension Extreme Label/Branding under Weinstein Company is churning out some great horror films.
Overall Rating: 4/5