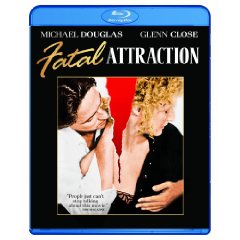 Stylish and sexy, Fatal Attraction took audiences to terrifying new heights with its thrilling story of a casual encounter gone terribly awry. This box-office smash was nominated for six Academy Awards, including Best Picture and Best Director (Adrian Lyne—Indecent Proposal, Flashdance). Michael Douglas plays Dan Gallagher, a New York attorney who has a tryst with seductive Alex Forrest (Glenn Close) while his wife (Anne Archer) is away. Dan later shrugs off the affair as a mistake and considers it over. But Alex won’t be ignored. Not now, not tomorrow, not ever…even if it means destroying Dan’s family to keep him.

After this one-night stand, Dan returns home to a call that his wife is staying another night because she could not go see the house. With another night of no wife, Dan gets a call from Alex who persudes Dan to spend another night with her. After contemplating another night of doing his relationship wrong, Dan goes back to Alex. Later in the film, Dan tries to shrug Alex away from him, but Alex will not feel like a “slut that Dan can bang when he feels”. Now the terror begins. A loving father and a loving husband who has an affair tries to get back into a normal family life but the thought of Alex always searching for him and the thought of her being able to tell his wife whenever she gets in a bad mood, frightens him.

With chills and intrigument galore, Fatal Attraction turns into a mindblowing plot twister. The cast is fantastic, with career roles for both Michael Douglas and Glenn Close. Director Adrian Lyne shows an understanding of how to turn the visual screws with his camera movement and angles. Fatal Attraction turned out to be steep competition for all films and thrillers made in the years following. With both critical and movie-goer praise, this film seemed to impress all who watched.
Movie Content: 8/10

The print is presented in 1080p/AVC MPEG-4 with a 1.78:1 aspect ratio. This is the best that ‘Fatal Attraction’ has looked yet, while the print still has grain throughout, it isn’t as apparent as it once was on the DVD. I found some scenes to be a bit washed out looking, while the colors have a decent pop. Details are rather clean and crisp throughout the presentation.
Video Quality: 7/10

The audio is presented in Dolby TrueHD 5.1 mix. ‘Fatal Attraction’ is a dialogue driven film. A bit of warning here, don’t come in expecting a bombastic mix even when elements in the mix should take advantage of the rears. Dialogue is very clean and crisp through the center channel. We have more of a front heavy experience with the mix as dialogue also tends to pan between the front speakers.
Audio Quality: 7/10

‘Fatal Attraction’ does not hold up as well here in 2009 as it did in 1987, but fans of the film will surely be pleased. There is tons of suspense, chills, and mystery in the film that will keep the viewer glued to their television from start to finish. Owners of the previous DVD release will be happy to upgrade to this new Blu-ray release with updated video and audio. I recommend this film as a rental to those interested and as a purchase for fans.
Overall Rating: 8/10