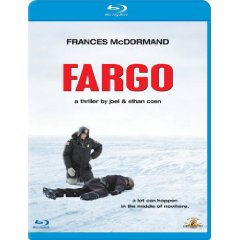 Leave it to the wildly inventive Coen brothers (Joel directs, Ethan produces, they both write) to concoct a fiendishly clever kidnap caper that’s simultaneously a comedy of errors, a Midwestern satire, a taut suspense thriller, and a violent tale of criminal misfortune. It all begins when a hapless car salesman (played to perfection by William H. Macy) ineptly orchestrates the kidnapping of his own wife. The plan goes horribly awry in the hands of bumbling bad guys Steve Buscemi and Peter Stormare (one of them being described by a local girl as “kinda funny lookin'” and “not circumcised”), and the pregnant sheriff of Brainerd, Minnesota, (played exquisitely by Frances McDormand in an Oscar-winning role) is suddenly faced with a case of multiple murders. Her investigation is laced with offbeat observations about life in the rural hinterland of Minnesota and North Dakota, and Fargo embraces its local yokels with affectionate humor. At times shocking and hilarious, Fargo is utterly unique and distinctly American, bearing the unmistakable stamp of its inspired creators.

The words on the screen tell us what follows is a true story (although it isn’t). And we know it’s going to be tragic, because it speaks of both the dead and of the survivors. The music swells, the melody crying out full-throated from the orchestra, with dignity and moral outrage, as if saying “How DARE someone do such a thing!”. A car emerges from the white nothing of a lonely stretch of Northern highway, a harbinger of evil forming on a nearly featureless canvas. It is Jerry Lundegaard (William H. Macy), the small, petty man who sets the tragedy in motion. He is driving to the meeting that will result, eventually, in a lot of suffering and death.

A “serious” film could not have set a gloomy, solemn tone any better, but “Fargo” has twisted humor in store for us. Yes, the film morphs, strangely, into a dark comedy. This is what most reviewers fixate on – the goofy accents, the wierdly sincere homespun dialogue, the droll, sardonic twists. But that genuine sense of despair and loss is hardly ever mentioned, and it hangs over the entire film like a pall. It’s what really makes “Fargo” resonate – deeply.

Jerry, utterly frustrated by an unsuccessful attempt to get money from his venomous father-in-law, pitches a fit alone in the parking lot. It’s funny, watching him hit his car with an ice-scraper and make strangled sounds like a petulant 5-year old. Funny right up until three innocent people die because of his hare-brained scheme to extort the money instead. Before it’s over, the body-count will more than double.

The violence in the film is never played for laughs. It’s straightforward, brutal, and uncompromisable, even when it gets downright bizarre. The characters may be eccentric and funny, the social conventions they live by satirized, but the core story is about greed leading to needless death. The Coens (writer Ethan and director Joel) are wise enough to play that part straight.
Movie Content: 9.5/10

The print is presented in 1080p/AVC MPEG-4 with a 1.85:1 aspect ratio. After having seen this film multiple times over the years, its debut on Blu-ray in high definition is very good. Colors are vibrant and vivid throughout the entire presentation. Black levels hold depth. Fleshtones are natural with no apparant edge enhancement. I found the details of the print to meet my expectations. The finer details in faces and the backgrounds really stand out. While there is a lot of good to this print, there is also some bad. There is print damage throughout the film and you will notice some banding which does get distracting. During the scene with the snow storm, the image just looks bad as if I were watching a low quality DVD. I am not too sure what happened there, but with only a handful of issues, overall this is a very nice transfer for a film that is 13 years of age.
Print Quality: 8.5/10

The audio is presented in DTS-HD MA lossless 5.1 mix. While the image has a few small issues, but holds up rather well, the audio excels. I was rather surprised as to how dynamic the audio mix was for ‘Fargo’ considering that this is a dialogue driven film. This is a front heavy presentation with the rears getting minimal usage, but it is the way that this mix is presented that won me over. I felt like the film has never sounded this good and clear especially the voices with the dialogue.
Audio Quality: 9/10

‘Fargo’ may not be for everyone as I have had friends that disliked this film. The Coen brothers films are usually for a specific audience which will be immersed into their world of story telling. I highly recommend this as an upgrade over the previous DVD release. The film offers excellent video and audio, albeit a few small video issues.
Overall Rating: 8.5/10