Walt Disney’s animated musical masterpiece is an extravaganza of sight and sound-now brilliantly restored for the first time ever in high defi nition! Blu-ray technology fi nally allows you to experience Fantasia-and Fantasia 2000, the triumphant classic it inspired-the way Walt envisioned! Plus, for the first time ever on Blu-ray, experience the 2003 Academy Award®-nominated animated short Destino-the extraordinary collaboration between Walt Disney and legendary artist Salvador Dali! Revealing new bonus features and commentary bring the Fantasia experience to life, allowing generations of moviegoers all over the world to enjoy this timeless classic like never before. See the music come to life, hear the pictures burst into song and experience the excitement that is Fantasia over and over again. 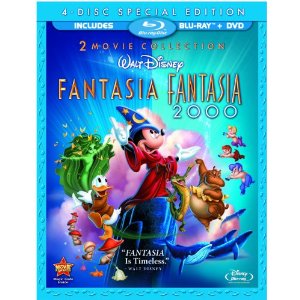 the missing (approximately) 15 seconds from the film has been missing since 1969. Most of us probably weren’t even born at that time. So it’s not like this isn’t the Fantasia that we grew up with. Besides, Fantasia has undergone many edits over the years. The original theatrical version was only 81 minutes long (and included the 15 seconds of racism), the version on this new blu-ray/DVD release is 125 minutes (and does not include the 15 seconds of racism, but has 44 minutes of footage that has been restored since the original release). There have been almost a dozen re-edits of Fantasia since it’s release in 1940, most of them to restore and repair lost or damaged footage, so making a big deal out of losing 15 seconds is redundant.

More importantly, if you actually saw the 15 seconds of edited film that has caused such a stir, you’d understand the need to remove it (by the way, if you’re curious enough you can find the missing scenes on youtube, or do a google image search for “Fantasia Sunflower” to see the black centaur). This is no small offense. The Pastoral Symphony scene is packed with beautiful skinny centaur girls of many different vibrant colors, all with perfect bodies (at least the non-horse part) and long flowing hair. Of the many colors of centaur there is only on black one, and this one black centaur also happens to be short and goofy looking with crooked teeth, big hips, messy matted hair, and huge pail lips. To top it all off, she’s clearly the servant to the other female centaurs, we first see her giving a pedicure to another centaur and then happily breathing on her hoof to polish it off like a good slave. She decorates her master centaur’s flowing tail with flowers only to get comically slapped in the face by it when the master runs off to see the male centaurs coming. The last we see of her she is dutifully walking behind her master carrying a string of flowers worn like a gown. There’s no doubt about it, this is racist as hell. The argument over this content is not whether or not the content is racist. We know, with absolute certainty, that it’s racist. The argument is whether or not it’s okay to excise it from the film.

Now I understand the need to preserve even the worst things in history, in fact, it drives me absolutely insane how many people completely disregard the fact that the founding fathers of this country were slave-owners. Just because this is a dark and abhorrent side of our history does not mean it should be ignored and that it shouldn’t be in our children’s school textbooks, this is stuff they shouldn’t have hidden from them. I also don’t think it would be okay to ban any re-release of the classic silent film “Birth of a Nation” even though it contains some of the most atrocious racism ever depicted on camera (and in a positive light, no less), it’s still an important piece of cinema history and the controversy only makes it more interesting. And I even find it completely ridiculous that Disney has not yet released “Song of the South” on any recent home video format, albeit with an introduction/disclaimer to remind people that it’s a product of a different time.

Be all that as it may, Fantasia is a different story, unlike the stuff mentioned above, Fantasia is not to be remembered as nothing more than a historical relic, Fantasia is still a culturally relevant movie with fans spanning many generations. It’s not “Song of the South”. If Disney was to release a remastered and unedited “Song of the South” on blu-ray next week, the only people to buy it would be fans of film history, it’s not the kind of thing parents are going to give to their kids to watch, in fact, it would be seriously irresponsible of any parent to let their kid watch a movie that reinforces negative racial stereotypes as much as that one does. The same could be said of “Birth of a Nation” (though I doubt many kids are interested in that anyway). Fantasia is a movie that kids still love, it’s timeless, it’s perfect, and it would be a shame to lose it all because of 15 seconds.
Movie Content: 9.5/10

The print is presented in 1080p/MPEG-4 with a 2.40:1 aspect ratio. Disney has brought Fantasia to life here in high definition on Blu-ray. This has always been a very colorful film and it shows even more on Blu-ray. Colors are deep and well saturated throughout the entire presentation. You can see such a splendid visual pop which is like an orgie of beautiful colors on screen. Blacks are strong and inky at times. Nowhere did the image ever appear soft with such strong colors and black levels. There is some subtle grain throughout, but never a distraction. Fans of the film will not be disappointed as this is a visual masterpiece.
Video Quality: 10/10

The audio mix is presented in DTS HD 7.1 Master Audio lossless track. I do not know where to being with the sound in Fantasia and the new 7.1 mix. This is a demo worthy mix that could easily sell those on the fence about the format. The soundfield is immersive at all times no matter if it is the special effects or the soundtrack. I was literally amazed with the amount of panning from each speaker in the rears. It sounded as if there were all kinds of audio going on in the room. Bass was punchy as it shows with the amount of effects.
Audio Quality: 10/10

If these films can fill your home with brilliant symphonic music, then it is worth the cost of admission on that point alone. 2000 will give your Hi Def screen a real workout. As a collection, this set should be seen as a must-have for any serious Blu-ray library.
Overall Rating: 9/10