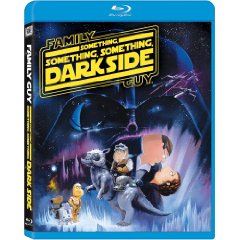 The story of The Empire Strikes Back is retold. Darth Vader (Stewie) is hunting the rebel Luke Skywalker (Chris) and his troops relentlessly across the galaxy. On the ice planet Hoth, Luke has a vision of his late mentor Obi-Wan Kenobi (Herbert), telling him to go to the Dagobah system to learn the ways of the Force under Jedi Master Yoda (Carl). Meanwhile Princess Leia (Lois) finds herself taking a shine to the scruffy pilot Han Solo (Peter) and, against all odds, the two soon fall in love. But an encounter with Han’s old friend Lando Calrissian (Mort) lands them in the clutches of the Empire. Envisioning this, Luke chooses to forgo his Jedi training to save his friends. It all comes to a head in a climactic confrontation with Darth Vader himself.

The film doesn’t follow a linear path, instead jumping from one day to another, for instance day 3 and then to day 344. What we see is the ups and downs of a romance between two young people. But what we get is a look at love, romance and the search for the perfect match. In the early days we are privy to the courtship of Summer by Tom, how he finally gets the nerve to ask her out, how he gets to know her and her getting to know him as well. And as with most romances, the two enjoy each others company and all of the details that become second nature to them both.

But as time progresses, or in this case moves back and forth, we see the change in their relationship. Gone are the small enjoyments in a look, a laugh, a whisper, replaced with finding these same things that were once treasures now annoyances. And yet, they remain together. Until the fateful day when Summer announces she wants to be friends, those killing words to any hope of being a couple.

This movie is about dreams of romance. Not just those of the couple we witness on screen but in the dream of romance that everyone searches for in their lifetime. And while some never find it, others do. While some hope for the one to walk into their lives, others find that special someone over time. And this film captures that in its combination of vignettes that come together to form one thoroughly enjoyable movie.
Movie Quality: 8/10

The print is presented in 1080p/AVC MPEG-4 with a 1.85:1 aspect ratio. he Blu-ray version of the film looks very good with a very rich color palette. Colors are vibrant with popping visuals. Black levels are strong. For an animation, details look very good making this a very sharp looking picture. When compared to “Cavalcade’ it makes this film a gem in the video department.
Video Quality: 8/10

The audio is presented in DTS-HD MA lossless 5.1 mix. The soundtrack is not anything that would make you scream demo material. The audio shines anytime there is music coming from the surrounds sounding clean. Dialogue was well positioned to the center channel and came through very clear.
Audio Quality: 8/10

Family Guy has been a hit or miss since they have came back to Fox but lets face it the Star Wars Spoof was great and just the title alone made me crack up. If you are a fan of Family Guy, I highly recommend Something, Something.
Overall Rating: 7/10