Clear some space for the third chapter of the funniest freakin’ trilogy in the galaxy! Once again, the Family Guy alliance travels far, far beyond the beyond the boundaries of good taste to bring you an outrageous sci-fi spoof filled with hilarious humor, adequate animation and a happy ending (giggity). So get ready to experience the lighter side of the Dark side with Peter Solo, Chris Skywalker, Princess Lois, Stewie Vader…and some surprising new faces. May the laughs be with you! 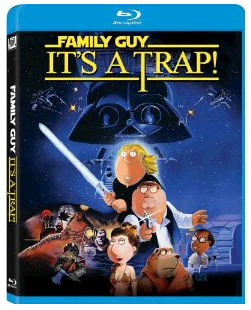 Well, “Family Guy” has come this far so it just makes sense to continue the rest of the way into the Return of the Jedi remake. This movie being released on Blu-ray and DVD is definitely Fox seeing the dollar signs and their jokes starting to get a little lazy and reaching as they admit in their opening credits.

The big difference between Robot Chicken’s Star Wars parodies and Family Guy’s is the jokes. Robot Chicken comes up with bits specifically worked around jokes and situations that they find hilarious and piece them together at random to make you bust a gut. Family Guy chose to go complete parody using their own characters almost line for line by the original script and then trying to make it funny. Family Guy IS funny, it’s just that the format locks them into a sequence of events that follow the movie and they have to work within those confines. For example, the hover bike chase scene through the forest becomes an actual bicycle chase with explosions. They’ve run out of Family Guy characters to use so they’ve started borrowing from “American Dad” and “The Cleveland Show”. The German fish character actually gets the “It’s a trap!” line.

Some of the jokes they really nail, especially in the last fifteen minutes or so. They pull in some classic Family Guy pranks of letting a joke go on WAY too long (nodding to each other in sequence) and throwing in a “Darth Twitty” clip (Conway Twitty with a photoshopped Darth Vader helmet on his head). Tim the Bear from “The Cleveland Show” is the Ewok with speaking lines and Rallo is partnered with Mort playing Lando for the Millenium Falcon battle scenes. The Ewok battles are far more bloody than you might remember in “Return of the Jedi” as some anti-Ewok creators were clearly getting their revenge. It’s funny and if you saw the other two you should watch this.
Movie Content: 8/10

The print is presented in 1080p/MPEG-4 with a 1.77:1 aspect ratio. The Blu-ray version of the film looks very good with a very rich color palette. Colors are vibrant with popping visuals. Black levels are strong. For an animation, details look very good making this a very sharp looking picture.
Video Quality: 9/10

The audio mix is presented in DTS HD 5.1 Master Audio lossless track. The soundtrack is not anything that would make you scream demo material. The audio shines anytime there is music coming from the surrounds sounding clean. Dialogue was well positioned to the center channel and came through very clear.
Audio Quality: 8/10

Seth MacFarlane’s take on the original Star Wars trilogy a la Family Guy is complete, and while It’s a Trap isn’t as overly funny or quite as fun as Blue Harvest or Something, Something, Something, Darkside; it still manages to deliver the goods and end things on a high enough note.
Overall Rating: 7/10