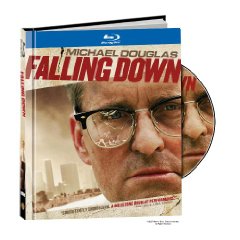 This film, about a downsized engineer (Michael Douglas) who goes ballistic, triggered a media avalanche of stories about middle-class white rage when it was released in 1993. In fact, it’s nothing more than a manipulative, violent melodrama about one geek’s meltdown. Douglas, complete with pocket protector, nerd glasses, crewcut, and short-sleeved white shirt, gets stuck in traffic one day near downtown L.A. and proceeds to just walk away from his car–and then lose it emotionally. Everyone he encounters rubs him the wrong way–and a fine lot of stereotypes they are, from threatening ghetto punks to rude convenience store owners to a creepy white supremacist–and he reacts violently in every case. As he walks across L.A. (now there’s a concept), cutting a bloody swath, he’s being tracked by a cop on the verge of retirement (Robert Duvall). He also spends time on the phone with his frightened ex-wife (Barbara Hershey). Though Douglas and Duvall give stellar performances, they can’t disguise the fact that, as usual, this is another film from director Joel Schumacher that is about surface and sensation, rather than actual substance.

I found this movie absolutely fascinating and overall quite entertaining. Although the frequent acts of random violence are somewhat comical, the rest of the film is a biosphere of our “American” culture. Douglas treks a path through L.A. and encounters various problems in society – sort of a modernized Greek “Odyssey”. Douglas is the only character who isn’t asleep . . . asleep to all the hate and injustice that is occurring in our lives.

Michael Douglas portrays your typical patriotic citizen who becomes “obsolete” in a constantly changing world. I think perhaps all viewers can relate with this character because we all have been rubbed the wrong way by the exact same people Douglas encounters in the film. And sometimes we’d like to flip out too.

The end of the film is particularly symbolic in the climactic resolution. I will stop there with the story to not give away any spoilers. I would definitely recommend this film to anyone who has at times felt betrayed by life or our “American” ideals.
Movie Content: 10/10

The print is presented in 1080p/VC-1 with a 2.40:1 aspect ratio. ‘Falling Down’ receives an upgrade from the previous DVD sets looking very stunning for its age. Colors are vibrant throughout the entire presentation. Blacks are deeper than expected and the stunning part of the image to my surprise. Very light grain is intact and subtly presented. The image looks sharp presenting excellent details. Throughout the entire film there is a light yellowish tint. Overall, I am very pleased with the image quality.
Print Quality: 9/10

The audio is presented in Dolby TrueHD 2.0 mix. While the image quality of the film is very good for a catalog title, the audio takes a step behind. This is merely a front heavy audio presentation due to the choice of not going with a TrueHD 5.1 mix. Also add the lack of a true bass prescence and  It is a shame that I never felt immersed by the audio, as a film based on psychology this could have been really done well.
Audio Quality: 7/10

I have always been fascinated by ‘Falling Down’ and is an intriguing film about a man’s life that has taken a spiral downward. The film looks great on Blu-ray considering this is a 17 year old film. I highly recommend this to those on the fence about upgrading their DVD alone on the image upgrade.
Overall Rating: 8.5/10