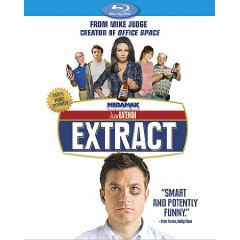 Mike Judge is in a familiar zone in Extract, which is sort of a close relative to his cult classic Office Space. But this time the main character owns the company, instead of being a cog in the machinery, and middle age presents a different set of challenges. Joel (Jason Bateman) concocted a new approach to soda pop, and his small company is bubbling along nicely–in fact, there’s talk he might get bought out by General Foods…unless something were to come along to really, you know, screw up the deal. Hmm, what could go wrong? Joel is sexually unfulfilled with his wife (Kristen Wiig), there’s a new temp worker (Mila Kunis) at the factory who favors minimal clothing, and Joel’s best friend (Ben Affleck), a slacker bartender, is bursting with bad advice. Oh, and there’s an employee (Clifton Collins Jr.) contemplating a lawsuit because of a workplace accident that left him missing an important piece of equipment. The film’s plot machinations are less enticing than the moment-by-moment behavioral observations, always a Mike Judge specialty. Examples: the chattering of the factory floor workers, who could easily have stepped out of a King of the Hill cartoon, or Joel’s suburban neighbor (David Koechner at his chummiest), the kind of yakety-yak blowhard who simply will not shut up, however many polite messages he receives. It might not amount to a whole lot, and somehow the gifted Bateman seems underused here (Affleck, on the other hand, is having a ball). But Extract seems destined for cable-TV repeatability, much like its corporate cousin.

From the mind of Mike Judge (“Office Space”) comes “Extract,” a movie about the mundane daily struggles of Joel Reynolds (Jason Bateman). Joel is the owner of a flavoring extract plant where he is forced to babysit his mismatched and unmotivated employees and dreams of the day he can sell the company off and stop working altogether. His wife, Suzie (SNL’s Kristen Wiig) sits at home, depressed and lonely, while Joel struggles to make it home before the eight o’clock deadline when she puts on her sweatpants and all hopes of coitus are squashed. A con-woman (Mila Kunis) comes into the picture, hoping to capitalize on a pending lawsuit against the company as well as catching Joel’s eye. Not knowing what to do, he turns to his drug-peddling bartender friend (Ben Affleck) who in turn suggests he hires a gigolo to have an affair with his wife so he can go forward with his own affair, guilt-free.

If it sounds ludicrous and over-the-top, it is. Mike Judge’s films always have a way of spinning everyday-life situations in the wildest ways. What starts out with the best (well, sort of) intentions quickly spirals downward into a mess beyond repair. Like “Office Space,” “Extract” is Judge’s version of what happens when the everyday, working-class man gets bored and decides to do something about it. Is it meant to be a cautionary tale or simply a social commentary? Whatever the answer, it works on both levels. You’ll laugh at Joel’s misfortunes while a little part of you feels sympathy knowing deep down that he is simply a nice guy gone wrong and that things like this (although not as extreme) could happen to any one of us. That sort of twisted reality is what makes a good Mike Judge film, and no doubt, this is another of his that is destined to become a cult-classic.

Thankfully, though, the movie isn’t so wacky that it loses its humanity. Despite some odd performances in the film, achieved brilliantly by Affleck, David Koechner and J.K. Simmons and the outrageous events that unfold, the film still keeps its heart firmly in place. Granted, you won’t laugh as thoroughly as you might during other comedies, but during Judge’s fourth feature-length film, you’ll squirm enough in your seat during the awkward moments to know that you were delivered a solid story with real characters and humor derived from their pain and suffering. “Extract” is, at the end of the day, an intelligent, hard-working and quirky little comedy that will no doubt find its audience in the years to come, much like “Office Space.”
Movie Quality: 8/10

The print is presented in 1080p/VC-1 with a 1.85:1 aspect ratio. “Extract” looks decent for a high definition film but I felt underwhelmed most of the presentation. It is a shame that a newer release like “Extract” doesn’t visually stack up with newer comedies released in 2009 in terms of video presentation. Colors are strong with this transfer but more on the softer side. This did cause a lack in details throughout the print. Inconsistencies like these would make you feel like you are watching an a DVD that was upconverted.
Video Quality: 6/10

The audio is presented in DTS-HD MA lossless 5.1 mix. I almost feel like this film did not even need a DTS-HD track as there is not much if at all anything going on in the rears. Bass management is well done as it fills the soundfield. Dialogue comes through the center channel rather clear, yet not loud enough. I just did not feel as immersed as I would have hoped with this mix.
Audio Quality: 6/10

While I did enjoy “Extract” for what it is, I was left disappointed with lackluster video and audio presentation. The budget may not have been at a level of “Forgetting Sarah Marshall”, these areas could have been given better care. To make matters worse, special features are lacking with only less than a handful of features added to the package. I would recommend as a rental first before purchasing.
Overall Rating: 6/10