Everything Must Go Blu-ray Review 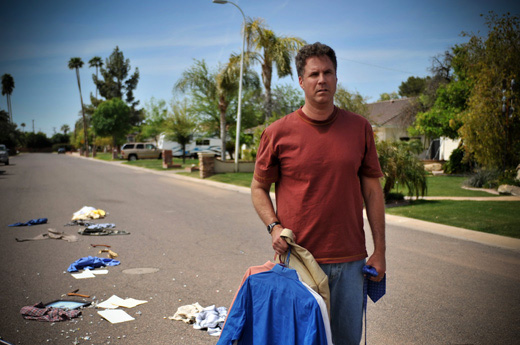 “Will Ferrell shines” (Detroit News) as Nick, a career salesman who loses his wife and his job in the worst day of his life. Faced with his life imploding, Nick puts it all on the line – or, rather, on the lawn – as he moves himself and all his possessions to his front yard. Based on the short story by Raymond Carver, Everything Must Go is “Will Ferrell as you’ve never seen him” (Rolling Stone) in this unflinching comedy about what happens after life falls apart. 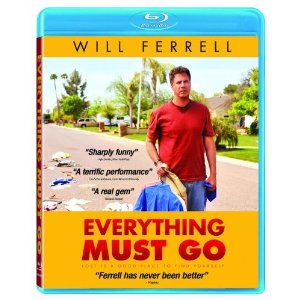 I’ve always considered Will Ferrell’s work to be somewhat of a guilty pleasure. Complaints of his comedy being stupid, childish and ridiculously over the top are completely justified, but most of it has still been relatively entertaining. His cameos are usually a bit stronger since they’re right to the point and aren’t force-fed to you like some of his leading roles, but films like Old School and Anchorman will always hold a special place in my heart for the kid in me that loves that nonsensical form of comedy. The few times Ferrell has ventured off into more serious territory have been pleasantly surprising. Stranger Than Fiction is probably the best example. While Ferrell’s performance in the Marc Forster directed comedic drama was one of his best and the film had moments of brilliance, but it wasn’t quite able to push itself into exceptionally memorable territory. Unfortunately, Everything Must Go is along the same lines.

Nick Halsey (Ferrell) is having the worst day anyone could possibly have. He loses his well-paying job of 16 years and falls off the wagon after being sober for six months. Upon returning home, he finds all of the locks and gate codes changed, a letter from his wife telling him that it’s over, and all of his belongings sitting on the front lawn. If that wasn’t bad enough, Nick’s credit cards no longer work and he’s blocked from using his joint bank account. He becomes overly possessive of, “his stuff,” and has no plans of ever leaving his front lawn. Detective Frank Garcia (Michael Peña), who is also Nick’s AA sponsor, eventually steps in and informs Nick that a yard sale could buy him a few days before he’d eventually have to take Nick to jail. With the help of a neighborhood kid named Kenny (Christopher Jordan Wallace) whose mom is never around and a pregnant woman who just moved across the street named Samantha (Rebecca Hall), Nick eventually learns the meaning of letting go and moving on with his life.

There’s a good film lying within the inner depths of Everything Must Go, but all of the decent aspects of the film feel underdeveloped and don’t really have the chance to really blossom into strong characteristics or qualities to make the film great. The humor in the film is incredibly dry. Everything Must Go has a slight Lars and the Real Girl kind of feel to it without the awkwardness or strong performances to make it memorable. There are brief moments that attempt to tug at your heart strings, but it’s like it all lacks follow-through. All the right elements are there, but just aren’t utilized to their full potential. Most of the performances feel kind of bland. Both Will Ferrell and Rebecca Hall show shades of actually being able to portray some emotion, but just when something starts feeling like it’s building to a memorable scene they fall back into ho-hum territory.
Movie Quality: 9/10

The print is presented in 1080p/AVC MPEG-4 with a 2:35:1 aspect ratio. The print looks very good throughout without any apparent issues. Colors are vibrant and carry pop which brings out the fine details. The detailed scenes stand out very well. Blacks are deep. I found the print to be crystal clear with no artifacts or print damage. The film mainly takes place outside, so the use of natural lighting really shows off the print.
Print Quality: 9.5/10

The audio is presented in a DTS-HD MA l0ssless 5.1 mix. ‘Everything Must Go’ is a dialogue driven film, so this is a front heavy experience. The dialogue was clear and crisp with no apparent issues. The mix is well balanced with the low usage of the surrounds. The rears do get some use with the soundtrack, but do not offer the excellent depth. I would say that this mix was sufficient enough for this type of film.
Print Quality: 9/10

Everything Must Go is a decent comedic drama that offers mediocrity from all sides. The most interesting aspect of the film is its premise, which the film is never fully able to capitalize on. The humor provided is more of the chuckling lightly variety instead of actually laughing out loud and everyone in the film seems to pretty much be playing the same character that’s incapable of showing the actual spectrum of emotions.
Overall Rating: 8/10

« Heshner Blu-ray Review
A Cinderella Story: Once Upon A Song‏ DVD Review »