Everybody Wants To Be Italian DVD Review

Posted in DVD Reviews by George Theofanopoulos on 02 February 2009 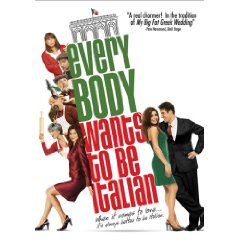 From Lionsgate Home Entertainment, ‘Everybody Wants to be Italian’ is a sweet, romantic comedy about a case of mistaken ethnicity. In Boston’s North End, two non-Italians pretend to be Italian to win each others hearts. The film was declared “a real charmer, a sweet flavorful romantic comedy with one of the year’s freshest and most appealing casts” (Back Stage) and “like My Big Fat Greek Wedding, but Italian…very funny” (OK Magazine). The DVD includes feature audio commentary, a making-of featurette, cast auditions and deleted scenes and will be available on February 3, 2009.

This weekend I was able to view a few upcoming films that left me with a bitter taste on some of the direction that these production teams are taking lately. I had some high expectations for ‘Everybody Wants to be Italian’ as it is a film that is in the same vein as ‘My Big Fat Greek Wedding’ but with an even smaller budget. The story of the film is not original, but not a bad one either for a romantic comedy. Some of the choices made for how the lead character would be portrayed hurt this film a bit.

This film tells the story of Jake (Jay Jablonski) who is a young fish shop owner. Jake has several internal issues with his relationships which keep failing due to him not being able to let go of the past. His relationship ended with his ex-girlfriend Isabella (Marisa Petroro) nearly 8 years ago when she decided to leave him. The thing is that she is married with three children and he can not move on. Jake continues to stalk her on a daily basis bugging her to leave her husband.

Jake’s co-works and friends have become tired of him not wanting to give up on Isabella. They being to try and find him a beautiful Italian woman. One day, one of Jake’s co-owner’s stumble upon the beautiful Marisa (Cerina Vincent) in the back alley. They put a plan into motion to hook up Jake with Marisa, hoping that he can finally forget about Isabella. Jake can not forget about Isabella at all and he continues to talk about her even when going out with Marisa. He stays honest with her by telling her he still has a thing for his ex, yet he tells her it’s his girlfriend.

The biggest downfall of the film has to be that they made Jake a goofball character. His character makes the viewer so upset by the film’s end that it drives you up a wall with how he has a nice woman at his doorstep, yet he continues to chase after the one he can’t have. The problem here is that way too much time is spent on Jake, which should have been the case here. It hurt the story because of liking the guy; you begin to think he is an idiot. It makes you wonder how he could own such a successful business when he is so conflicted.

The acting was good though from the entire cast which is probably one of the reasons I was intrigued to sit through the film till the end. Both Jablonski and Vincent have a decent chemistry with each other. But the issue with Jablonski’s character hurts the film more than anything else.
Movie Content: 2.5/5 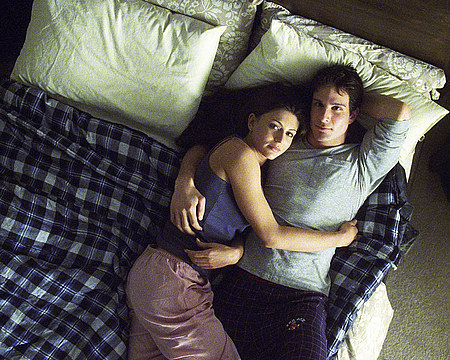 ‘Everybody Wants to be Italian’ could have been so much more if it hadn’t been about pushing Jake and his stalking issues with his ex-girlfriend. I would recommend this film as a mere rental if there is absolutely nothing else to watch. When the film tries to redeem itself, the character of Jake brings the film down a few notches.
Overall Rating: 2.5/5