Posted in DVD Reviews by George Theofanopoulos on 15 March 2009

A vehicle floats in midair … a coat rack comes to life and attacks a sheriff … and wild animals are putty in the hands of Tony and Tia Malone in Disney’s thrilling fantasy adventure about the psychic powers of two young orphans. Their clairvoyance prompts evil millionaire Aristotle Bolt (Ray Milland) to lure them to his mansion to exploit their powers. While escaping, they meet a friendly camper (Eddie Albert) and begin to unravel the mystery of their origin. Soon, all three are fleeing townspeople who have branded the children witches. But then IT happens! Someone with even greater powers takes over and leads the children — and the audience — into a dazzling and unexpected experience … one that is truly out of this world! Return From Witch Mountain – DVD- In this thrilling sequel to Disney’s ESCAPE TO WITCH MOUNTAIN, automobiles mysteriously fly and humans float in thin air as sinister masterminds Christopher Lee and Bette Davis unleash a diabolical plan. The entire city of Los Angeles teeters on the brink of nuclear disaster when the greedy criminals manipulate a young boy’s supernatural powers for their own devious gain. But the youth’s sister and a streetwise band of truants join forces in a desperate attempt to save the city from destruction. 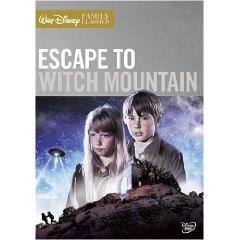 In ‘Escape To Witch Mountain’, Tia and Tony Malone are two psychic, orphaned aliens on the run from a evil capitalist (Ray Milland) who wishes to use their powers for gain. This particular film is a nice departure from the usual 70s Disney fare in that it treats its sci-fi subject matter rather seriously, not devolving into camp as was the usual recipe for films of the era. Eddie Albert has a nice turn as a bitter widower who befriends the children, as the three of them go on the run; almost like a kids’ version of “The Fugitive.” The chase scenes are endless but suspenseful and mostly engaging.

The special effects are few and generally revolve around objects being levitated. Look for a hands-free marionette show that could have given Maria VonTrapp and that lonely goatherd a run for their money. The film was shot in 1975, but there is very little in the picture to date it, besides some rather clumsy process shots at the film’s finale of a UFO and a flying Winnebago. The UFO was cheesy even for its day. However, the film was very successful among children of the time because of the relatable characterizations of the two leads and the believability factor that Disney provided. 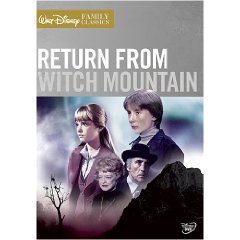 The same cannot be said for the 1978 sequel, ‘Return From Witch Mountain.’ Quite unlike its predecessor, this film is all about camp. HIGH camp. Whereas the first film was a bit coy about the use of the kids’ powers, this one exploits those powers for all they’re worth. People fly through the air. Cars fly, crash, and magically are put back together. Goats go for taxicab rides. The film is far less believable, but still a lot of fun. You know you’re in for a camp-fest when the villains turn out to be none other than Christopher Lee and Bette Davis! The plot this time concerns the two aliens taking a little vacation in sunny Los Angeles. Christopher Lee, playing a character named Victor uses a mind control device to seize Tony’s little alien brain and it isn’t long before cars fly through the air, gold bricks disappear from a museum, and a plutonium processing plant is under psychic siege. Tia runs for help from a would-be preteen street gang, and Jack Soo, playing a truant officer in a nice supporting part. The “gang” is strictly a Disney version of a gang, with names like “Muscles” and “Dazzler.”

The Los Angeles they inhabit looks more like Dresden after World War II, but it’s just a short trip from the Rose Bowl and Victor’s castle, yes I said castle, somewhere in the heart of L.A. where he’s got Tony strapped up to enough dated 50s lab equipment to bring Frankenstein back again. The UFO shots in this film are, if possible, even worse than in the first film. Some of them even look like they were stock footage from “Escape.” These shots nearly killed the picture, seeing as how it was released after “Star Wars.” Bette Davis is a star soprano of camp, hitting the high notes in her role as a aging socialite who finances Victor’s evil experiments. She’s at her woozy boozy best, barking out commands at the top of her lungs and abusing all in sight. All in all, these movies are two very different movie experiences. The difference in tone in the second movie may be jarring for some fans.
Movie Content: 4/5

For fans of both films, you will not be disappointed with these new releases on DVD. I do wish that Disney would have released both films on Blu-ray offering these classics in high definition. I highly recommend checking out these originals before viewing the new film in theaters.
Overall Rating: 4/5