Posted in DVD Reviews by George Theofanopoulos on 09 July 2011 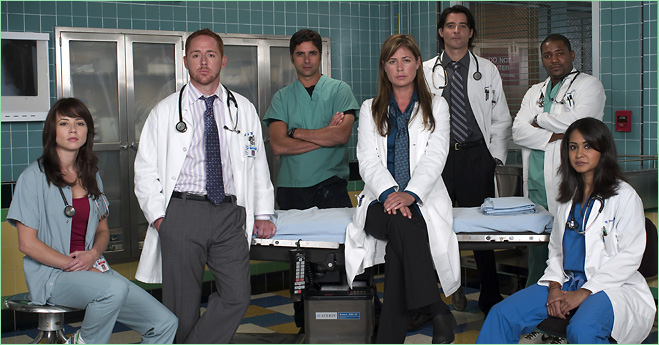 Combining the extraordinary talents of best-selling author Michael Crichton (Jurassic Park) and Steven Spielberg’s Amblin Television with Peabody, Humanitas, and Emmy®-winning producer John Wells (The West Wing, Third Watch) and Emmy® winner Christopher Chulack (Third Watch), the multiple Emmy® Award-winning ER explores the inner workings of an urban teaching hospital and the critical issues faced by the dedicated physicians and staff of its overburdened emergency room. These medical professionals remain determined to save lives in a place where nothing is taken for granted and nothing is certain…nothing except that another desperate person will be rushed through the emergency room doors in the next moment in need of their help 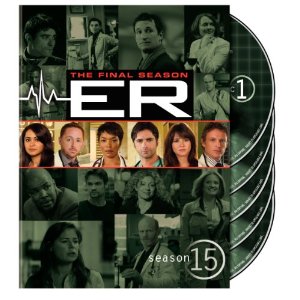 After countless highs and lows over the previous five or six seasons, it was hard to know what to expect from ER’s farewell season.Fourteen, which was supposed to be the final season before the writer’s strike, got off to a mediocre start and had just begun to set up the ending during the midpoint of the season. Consequently, it came as no surprise to me when NBC announced in April 2008 that ER would get one more shot at an (uninterupted) 19 episode send off. It was the best thing that could’ve happened.

The fifteenth season picks up seconds after the previous season finale, with the wounded from the ambulance bombing flooding County General. (SPOILERS AHEAD) The episode also includes a wrenching sned off for Dr. Gregory Pratt, the final regular cast member of the show to be killed off. With this first episode, the early days seemed to be back. The intensity that had been lacking from more recent seasons returned, and stayed with the show all throughout the fifteenth season. The writing also improved, and several fresh storylines centered around County’s newest Doc, Catherine Banfield (NAACP Image Award Winner Angela Bassett, Best Supporting Actress in a Drama Series, 2009, ER). Her character also served as a portal into the past, the key to a storyline involving Dr. Greene that allowed Anthony Edwards, Laura Innes and Paul McCrane to reprise their roles. Throughout the season, Shane West, Noah Wyle, Sherry Stringfield, Eriq La Salle, Alex Kingston, George Clooney and Julianna Margulies would also make
appearances.

The greatest thing about this season is how it seamlessly blends old storylines and characters with new ones yet never makes the mistake of wasting screen time with too many syrupy reunions. Perhaps unlike any other show in TV history, ER portrayed a workplace. Not a fantasy one where the same people are there year after year, but where people move on, die, quit, and are replaced by other individuals who must push forward for the greater good. Some viewers didn’t like that we didn’t get to see Dr. Ross and Carol Hathaway interact with Dr. Carter or even realize that the kidney they sent to Chicago saved his life. But that’s realistic. Sometimes people move on and don’t keep in close contact with old friends, even if they didn’t have a major falling out. Watching Doug and Carol work at the hospital in Seattle pushed their characters forward instead of boxing them in to the role of “returning cast member”. The writer’s thought a little outside the box, and for that I’m truly grateful.

There are many beginnings and endings in this season for the characters we’ve watched over fifteen seasons. And the best thing about the series finale is that it doesn’t neatly wrap up every storyline. It leaves the viewer to add his or her own interpretation about how things will turn out. If you looked the two hour series premiere of ER, chances are you liked the two hour finale (winner of the 2009 Emmy Award for Outstanding Directing for a Drama Series). The last spoken line
and final shot of the series remain one it’s best moments. Whether you were a loyal viewer for all fifteen seasons or only caught the first few, this is a must watch season.

Even with the new editions we are still left wondering what will happen to our stars; such as Abby and Luca, Carter, Susan Lewis, Doug Ross and Carol Hathaway. To those who have followed ER through all fifteen seasons, like me you will not be disappointed with this season. Albeit a little sad to see such an epic and amazing series come to an end.
Overall Rating: 8/10