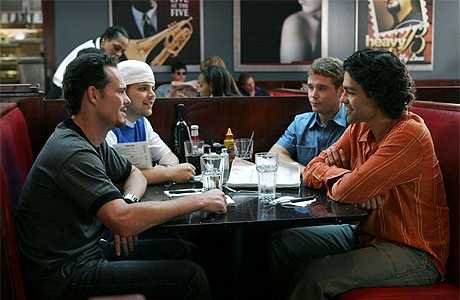 For Vince, Eric, Drama and Turtle, life in Hollywood’s fast lane can be an intoxicating ride. This season, after an accident during the filming of his latest action flick, Vince develops a new lease on life that makes him even more difficult to manage, while each of the guys must decide which steps to take to map out their own futures, both personally and professionally.

While there are some things that drove me crazy about this season I have to admit that I was sitting there glued to the TV for every episode. The entourage crew is a interesting and likable as ever and during season 7 the show tried to bite into some juicy story lines. Unfortunately they bit off more than they could chew. So, while it’s going to entertain you, if you’re like me it also going to leave you frustrated.

This season seemed to be filled by almost the entire entourage gang sabotaging their lives. With a show that only lasts for about 20 minutes & a season of only 10 episodes they just couldn’t fit all of the plots in. Sometime the majority of the show felt like filler & then in the last couple of minutes they would slam some major plot twist. The worst part is they wouldn’t necessarily pick up the plot twist in the following episode. As an example we leave episode 6 not knowing if Vice has OD’ed on the side of the pool….a huge plot twist, episode 7 ignores the incident. I also think his friends would notice and intervene sooner. Even if they are sidetracked with their own lives they are a close nit group that really care for each other.

The most developed storyline is Ari going after an NFL franchise and his abusive behavior finally blowing up in his face. I love his character but it is about time. There is Drama’s character that spends 1/2 the season pestering everyone to make his career work for him and then when he gets a huge break wants to turn it down. Even Turtle’s character was having a lot of plot twists, finally making something come together before it falls apart.

The print is presented in 1080p/AVC MPEG-4 with a 2:35:1 aspect ratio. If you thought this series looked good on DVD, you will be in for a treat when it comes to its release on Blu-ray. I found colors to be strong throughout each of the episodes. Black levels are deep and it shows very well with this season on Blu-ray. Fleshtones are natural. Details are fantastic and some of the best that I have seen in high definition.
Print Quality: 9/10

The audio is presented in a DTS-HD MA lossless 5.1 mix. ‘Entourage’ is a mix between dialogue and soundtrack heavy television show and it really shows with how well the audio is placed through the soundfield. Dialogue is clean and clear providing some excellent depth. For a television show, I was rather impressed with how clear the audio is. The soundtrack is like a sonic boom on each episode providing a nice audio experience.
Print Quality: 9/10

When most fans talk of Entourage, they talk of the glory of the previous seasons, they talk about how some don’t find it funny anymore.
Overall Rating: 7/10